Though people in China are optimistic about their country's economic prospects, they are increasingly concerned about the quality of the environment, food safety and inflation, a new survey on Chinese attitudes shows.

The Pew Research Center's findings illustrate that as "the country's wealth grows and millions move into the middle class, issues such as the environment and consumer safety are moving to the forefront".

The survey's 3,226 participants, interviewed in person between March and April, were asked to rate 17 topics as a "very big problem", "moderately big problem", "small problem", or "not a problem at all", or they could refuse to answer.

Respondents think positively of the country's economic situation - 80 percent expect the economy will improve in the next year and 82 percent think that Chinese children will be financially better off than their parents. But there were increasing concerns in several areas, including air and water pollution, the quality of products and corruption among officials.

"Just since last year, there have been significant changes in views about the environment. In January, air quality in Beijing and several other major cities reached record lows, and the public is increasingly taking note of this issue," according to the survey.

Dara O'Rourke, associate professor of labor and environmental policy at UC Berkeley, said that the difference one year made in changing people's perceptions of the environment surprised him, but he noted that this year was a bad one for Chinese environmental issues.

"The number of really scandalous conditions on air and water quality, pollution incidents, food contamination, really signal why awareness and concern has gone up so fast in China," he said.

Robust Internet use allows people to learn more about high-profile environmental issues in the news, O'Rourke said, and social networking "allows the bad news to spread much quickly than ever before". 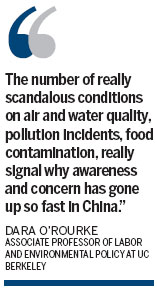 People are realizing, he said, that what is happening with the environment is "this base trade-off between economic development and the health and well-being of the Chinese citizenry".

The gap between rich and the poor was also of increasing concern to the respondents: 52 percent thought it was a very big problem, up from the 41 percent in 2008. The number of those concerned with rising prices of goods dropped to 59 percent this year from 72 percent in 2008.

Increasing levels of disposable income led to more concern about food safety, quality of manufactured goods, and the safety of medicine, according to the report. More than 70 percent of respondents thought food safety was a problem, compared to 49 percent in 2008.

"Overall, our sample looks like the general population, but what we did find is that when we ask specifically about some of these consumer safety, product safety-type issues, those issues in particular were a real concern to urban residents, people with higher incomes, younger people," said Richard Wike, associate director of the Pew Research Center's Global Attitudes Project.

Wike said that issues like consumer safety are issues that "you would expect [to grow] in importance in a country like China, where more and more people are joining the middle class".