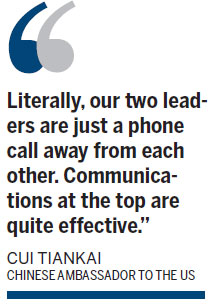 Chinese Ambassador to the US Cui Tiankai has spoken frequently about bilateral relations since assuming his post in April. On Tuesday, he returned to his alma mater, the Johns Hopkins University School of Advanced International Studies, to chat with students about China's foreign policy and Sino-US relations.

A 1987 SAIS graduate, Cui explained in plain words to a packed auditorium of students and faculty the principles of China's foreign policy, which he described as "independence" and "peace".

He drew on the country's recent history of a century of humiliation since the Opium Wars of the mid-19th century to explain why independence means so much to the Chinese.

"It must be emphasized here that when we reflect on this 'century of national humiliation', we are not talking about seeking revenge," he explained.

"Based on our own experience of sufferings in the past, we know that two wrongs don't make a right. A world where some nations are more equal than others is a horrible place for all," said Cui, who was China's vice-foreign minister before becoming ambassador to the US.

Cui then displayed his calligraphy of the Chinese character "he", which he said means peace, harmony, reconciliation, integrity and benevolence.

"Indeed, 'he' has been the guiding principle for Chinese society over several thousand years in addressing all issues, within and between families, groups and communities," he said.

"It is not exaggerating to say that it is in our nation's DNA. And it is only natural that it should find its way into our foreign policy," said the career diplomat, who turns 61 later this month.

He summarized the bilateral relationship as in "good shape despite some ups and downs", citing that the presidents of the two countries are in close touch through correspondence and phone calls in addition to their two meetings this year.

"Literally, our two leaders are just a phone call away from each other. Communications at the top are quite effective," he said.

Cui said the two sides are working together to build a new model relationship based on mutual respect and win-win cooperation after the leaders' summit in Sunnylands, California, in early June.

"This new model is called for by the new realities of the world in the 21st century. It is in conformity with the long-term interests of both countries and with the expectations of the international community," he said.

"The fact that China and the United States are undertaking this together shows the determination of both to break the old cycle of major power rivalries and open up new prospects for a win-win outcome."

He said building such a model relationship is no easy job, but "we have no alternatives, if we really don't want to have a lose-lose situation".

Cui believes such a common endeavor requires vision, wisdom, mutual trust, determination and perseverance from both sides in order to succeed.

Cui, who was China's ambassador to Japan from 2007 to 2009, expressed his deep concerns over some Japanese politicians' outlook on history.

He said China believes that disputes must be resolved through bilateral negotiations and dialogue between China and the countries concerned.

Cui said that while China understands that not all disputes can be solved overnight, China has to respond to provocations.

The Chinese ambassador said there are two views for the Asia Pacific. One believes that the region is the most promising and dynamic region in the world and full of opportunities for everybody.

"That's why we have to concentrate on cooperation, economic development and economic integration," he said.

The other believes the region is full of conflicts and full of dangers and what some are working at is to turn the region into a possible battlefield.

"The first view represents the common interests of all the people in the Asia Pacific, including China, the United States and Japan," Cui said.

"He has a positive message. I'm glad to hear that," Caroline Smeallie, a SAIS student among the audience, told China Daily after Cui's speech. Smeallie lived in China for several years before coming to SAIS.

"I think Cui's talk was great. It reflects the reality of the international community," said Ge Jun, a Chinese student at SAIS.

New round of speculative fund inflows