The fish that didn't get away

"For the last 20 years across Ontario, we have been educating and alerting the public to the harm that invasive species can cause," Quinney said. "Of course, most recently, at the top of our most unwanted list are these Asian carps."

Last year, the Federal Minister of Fisheries and Oceans Canada, Keith Ashfield, allocated $17.5 million over five years for Asian carp prevention, according to a report in Ontario Out of Doors magazine. 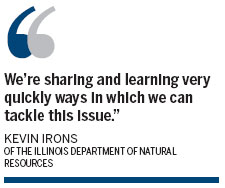 The proposed act would provide new tools to restore and protect the lakes, and create targets and action plans to better address the complex challenges facing the Great Lakes, according to a statement from the Environmental Defence.

This summer, the Environmental Defence released a report called "Tipping the Scales: how Canada and Ontario Can Prevent an Asian Carp Invasion of the Great Lakes."

"Whether it's acid rain or rivers catching on fire, whatever it is, it's only once we've seen these very visible, dramatic examples of the consequences of our actions do we take action," Goucher told China Daily. "In this case with invasive species, particularly with Asian carp, we can't afford to wait until there's a crisis."

She said research has concluded that if Asian carp broke through the Chicago waterway, they could spread into Lake Heron and the Georgian Bay within five years, and Lake Erie in 20 years.

"People living on Lake Erie might say, 'Well, that's a problem 20 years out,' " Goucher said. "But it's a problem that if it starts today, there's nothing we can do about it in the future. It really is an issue that requires immediate support."

Quinney said occasionally people need these reminders of real life damage that invasive species can have on North American society, and gave a couple of examples of already established Great Lakes invaders, including sea lamprey and zebra mussels.

Quinney said the people of Canada and the US have spent $1 billion to control and manage sea lamprey alone in the Great Lakes over the last 50 years, and it has taken us decades to recover those valuable fisheries that collapsed as a result of the very fast invasion of sea lamprey. The documented costs for zebra mussel damages and controls are estimated at up to $500 million annually.

"What I'm trying to emphasize is the threat posed by aquatic invasive species like sea lamprey, like zebra mussels, like Asian carps, is not a theoretical one, it's not a hypothetical one," Quinney said. "We know the harm that has been caused in the past, and that's why we have to be so vigilant now and absolutely address this with the greatest of priorities."

China has to brace for next dollar drama

Life of Pi artwork on display

US deal key to nabbing fugitives

China is reaching its tipping point