Norm Page, a partner at Davis Wright Tremaine LLP, a US business and litigation law firm, and chair of the firm's China practice in Shanghai, said financial leasing companies will be encouraged to start up in the FTZ, including in the factoring (selling of accounts and collecting debt) business.

"China wants to help small and medium enterprises (SMEs) get more access to financing.SMEs are the biggest source of job growth in both China and the US," said Page, who has lived in Shanghai for seven years.

In one major difference from other economic zones (which emphasized manufacturing) in China, the Shanghai FTZ focuses more on the finance industry - an area that Chinese and Western economists have argued should be liberalized more to boost the country's economy. 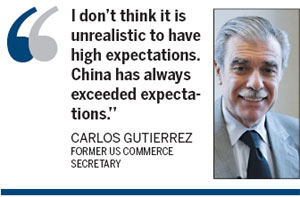 Banking regulators have allowed 11 financial institutions, including the Industrial and Commercial Bank of China, Bank of China, Citi (China) and DBS (China), to set up branches in the zone.

The idea that these foreign banks can participate in equity and capital markets fully and freely in the FTZ will create availability of capital for the economy, which "also takes stress off the central bank", said Gutierrez.

"The next big opportunity is, in general term, services - that's specifically financial services - and to open up financial services can be the next engine for economic growth for China," said Gutierrez, who served as vice-chairman of Citigroup Inc's institutional clients group.

Christopher Wells, a partner at Bingham McCutchen, a global law firm with offices in China, however, said lifting some restrictions in financial services is a very "modest" change, not really a major one.

"Banks will probably take advantage of it, but it will do little to make Shanghai a serious financial center," said Wells.

"All financial markets that compete with Shanghai - Hong Kong, Singapore, Frankfurt, New York, London, Paris, Los Angeles, San Francisco and Sydney - already allow this and have allowed it for decades," he added.

In other details about policies for the financial industry, the zone will be "under the precondition that risks can be controlled", it will create conditions to test RMB convertibility under the capital account, market-set interest rates and cross-border use of the Chinese currency within the FTZ. Citigroup is one of those that plan to set up a branch in the zone.

Gregory Chin, a professor of political economy at York University in Canada and a former Canadian diplomat in Beijing, said the new policies in financial services in the zone mark "an important watershed moment" in Shanghai's efforts to build a greater role as a hub for onshore RMB business and cross-border RMB business.

"For a long time now, especially in the period since China entered the WTO, foreign banks and financial interests have wanted more room to operate inside the Chinese market, especially in the Shanghai area, and beyond," said Chin. "Foreign financial institutions see enormous business potential inside China, especially if they can expand into more areas of RMB-based lending and other RMB financial activities."

Sophii Weng, an economist with Standard Chartered Bank in New York, said Shanghai's FTZ is still in its "conceptual territory" even with certain new policies in the banking sector. She said the blueprint on the banking sector lacks "details".

"The free trade zone could be the key to China's integration with the global trade and investment environment, which could be attractive to US investors, who see red tape as a significant challenge in doing business in China," said Weng, also a Shanghai native.

Even with services such as cross-boarder use of Chinese currency, it is still unclear to what extent the free trade zone will operate as an offshore financial center, said Weng. "Banks and other financial services firms are looking at establishing a presence in the zone. But what they will be allowed to do is still quite unclear," she added.

The enterprise sectors off-limits to foreign investors also apply to those from Hong Kong, Macao and Taiwan. In addition, pornography and gambling businesses are banned in the zone.

Despite all the big expectations and potential that the new zone holds, some believe it is too optimistic to think it will quickly help Shanghai catch up with established financial hubs in the world.

"In the medium-term, the real question is whether success in Shanghai can be replicated elsewhere in China and whether parallel reforms in the mainland's financial sector prove successful," said Dan Steinbock, Research Director of International Business at the India, China and America Institute.

"In the past, many US-headquartered businesses have had their regional hub in Hong Kong or Singapore. Shanghai has been perceived as more risky, less rewarding," he said.

But Shanghai's FTZ can provide many benefits that used to be the monopoly of Hong Kong and Singapore, plus a sophisticated gateway to Chinese markets, said Steinbock. "That's why foreign direct investment inflows have been accelerating in Shanghai, grown moderately in Singapore and stagnated in Hong Kong," he added.

While expectations for the FTZ are high, there is an opportunity for businesses to capitalize on the broader trend of China's opening up, said Brendan Ahern, managing director of New York-based KraneShares, a boutique asset-management firm delivering China-focused exchange traded funds to US investors.

"The experience of doing business in any foreign country is a learning experience that does not happen overnight. Ultimately the spoils will go to the nimble innovators who recognize the tremendous opportunities in China," he said.

Assuming the FTZ will deliver its promises in time, the real challenge as it takes off would be infrastructure, according to former Commerce Secretary Gutierrez.

"Opening up a free trade zone like that is going to put a lot of pressure on infrastructure if you want goods to move freely," he said.

Despite the challenges, the zone's creation carries an interesting social cultural element that can put it closer to world-class cities like London or New York, said Frank Lavin, a former US under secretary of Commerce for International Trade and founder of Export Now, a company that helps US businesses sell online in China.

"Given the growing strategic role of China's economy, and combined with the ease of business in an FTZ, Shanghai could easily evolve into the key international business center of Asia and one of the top cities in the world," he said.

Chinatown restaurants learn how to get an 'A'