While some have said the results of the Communist Party's Third Plenum are lacking in detail and focus, longtime China observer Orville Schell said critics should be careful not to be so dismissive about the message gleaned from the abbreviated communique released on Tuesday.

"Even though the statements that have come out of this Third Plenum have been rather vague - and on the Internet in China there's been a lot of naysaying that this is not very significant - I think that we ought to be a little bit careful before we dismiss them as being less than we thought they might be, or perhaps in some cases, hoped they might be," Schell, director of the Center on US-China Relations at Asia Society in Manhattan, said on Wednesday about the Third Plenum during a teleconferenced discussion with the media.

Schell said that it doesn't serve China's current leaders to "crow too loudly about what it is he intends to do and wants to do, and to define it too clearly."

That was the practice of previous "big" leaders like Mao Zedong and Deng Xiaoping, but today's leadership is more focused on the "consensual scheme of things", which means projecting an appearance of unity and consensus, said Schell, who wrote about China overcoming national humiliation and securing national wealth in his latest book , Wealth and Power: China's Long March to the Twenty-First Century.

"It's much better to speak vaguely and quietly, and then see if you can't make something happen," he said.

There's an aversion in China these days, he added, for the leadership to be too explicit with its plans, contrasting with what Americans are used to from their politicians. "Americans always want to know, 'Alright, what's your plan? Let's differentiate you from your opposition,'" he said, but there's no room for that kind of tactic in China.

Any statement that came out from the plenum that might have been perceived as too provocative would have antagonized vested interests, and if that were to happen, it would be more difficult for President Xi Jinping to implement certain kinds of reforms, said Schell. 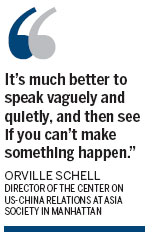 One item the communique announced that analysts have honed in on was the creation of a national security committee. "[The Party] tried that under Jiang Zemin and it really came to nothing because there was a lot of resistance to centralizing power away from the existing power-holders," Schell said.

China's national security committee, however, is not exactly like the US', which acts more like an executive advisory board, according to Schell.

"[The committee] is really an effort to consolidate all of the security organs of the state, [all of the different agencies] which the party is more and more relying on, as it becomes increasingly wary of all sorts of fractures in society," he said.

A more detailed report from the plenum is expected to be released in the coming days, expanding on the briefer communique.

"I think in this particular case," Schell said, "the proof will really be in the pudding, rather than in the recipe." This plenum revealed Xi's intention to centralize power, re-gathering "a certain amount of control within his own hands to initiate somewhat more quietly some meaningful reform going forward," Schell said.

Everybody agrees that this is an "inflection point" for the country-the reforms that Deng proposed and his successors have carried out are in need of redefining, Schell said.

"They need a new script to be written for a new act, and people were hopeful that this would be the beginning of that writing," Schell said.

"Whether it has the ability and the flexibility to continue, this is something better received in hindsight than foresight," he added.

Banks'nonperforming loans up slightly in Q3

Investment treaty with US offers risks and rewards