IMF says reining in borrowing is important for long-term stability

China should move to rein in a record expansion of lending that endangers the financial system, even if growth slows, an International Monetary Fund official said.

"China's growth rate may go slightly lower than the 7.5 percent we are forecasting, but that is a desirable adjustment to a more sustainable growth path," IMF Asia-Pacific director Changyong Rhee told reporters on Friday.

His comments reiterated the message in an IMF report this week that China risks a financial crisis that could cripple the world's second-largest economy and wreak global economic havoc without stronger oversight of its lending practices. Although the Global Financial Stability report said Chinese officials are moving too slowly to manage loose lending, the report cautioned against quick steps that could trigger financial panic.

Rhee downplayed concern about the scale of borrowing by China's local governments, pointing out that most of the debt is in local currency. "There is room for the Chinese government to react," he told the briefing. "But that's why it is important to rein in the credit pension by local government" to ensure stability.

China's willingness to assist debt-saddled financial institutions has encouraged borrowers to take on even more debt, observers have said.

IMF Asia-Pacific Deputy Director Markus Rodlawer told the briefing that China sees, correctly, that removing all the debt at once won't work because "you open the floodgates to more borrowing".

IMF supports "not removing in one stroke all the debt from the government's books", Rodlawer said. "The key is to reorganize the flow in a way that's much more rational." 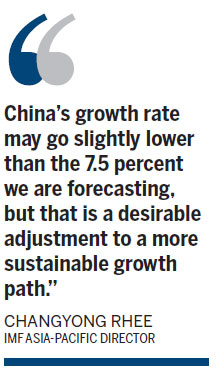 Rhee said the IMF projects Asian economic growth edging up to 5.4 percent this year and 5.5 percent in 2015 from 5.2 last year. The outlook for China's GDP growth is based on an assumption that China will gradually rein in rapid credit growth and make progress in implementing their reform blueprint so as to put the economy on a more balanced and sustainable growth path", according to the IMF report. The IMF's estimates are unchanged from its January forecasts.

IMF financial counselor Jos Vials has said Beijing needs to ensure that lending rates more accurately reflect risks. One way to do that would be to raise borrowing costs, he said.

Rhee said the panic that gripped emerging economies last year after the US Federal Reserve announced it would reduce its bond-buying economic stimulus program appears to be over. "Emerging economies in Asia are doing better than developed economies in the region," due to moves aimed at strengthening macroeconomic and institutional frameworks after the quantitative-easing turmoil, the official said.

Asia, however, must strive to implement financial reform to be able to withstand global upheaval, Rhee said. "This is not a time for complacency in Asia. It is time in Asia for vigilance and reform. Without reform, Asia becomes slightly more vulnerable."

In remarks delivered at the IMF meetings Friday, Secretary Jacob J. Lew held out China's "forward-looking" reforms as a model for other nations to emulate. The November meetings of the Chinese Communist Party leadership proposed changes that "hold promise for a shift to a more balanced economy that delivers higher living standards" and "continued economic stability and growth", Lew said.

Exchange rates must rise further to allow consumption, rather than investment, to drive domestic demand and insure a sustainable economy, he said.