Chinese in 'orbit' over lollipops

Sweets lovers in China are in orbit over a US confectioner's out-of-this-world lollipops.

Vintage Confections' pops with edible images of the solar system have become a favorite of Asian candy lovers, particularly those in China. 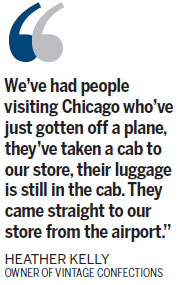 "There's something to be said for a set of pieces that are a whole solar system," company owner Heather Kelly told China Daily. "It's not just China. It's not just the United States. It encompasses everything that we're part of."

"We know Pluto is no longer classified as a planet," Kelly said. "We hear it all the time. We feel bad for Pluto. We keep it in the set."

The line's popularity with Asia consumers, particularly those from China, has Vintage Confections' 26 employees producing lollipops nearly round the clock, churning out 12,000 to 15,000 every five days, Kelly said. Asian customers account for 95 percent of the company's business, she said.

"A lot of the Chinese will come to America - they're students here or they are visiting the US - and so they'll order and they'll have them shipped to friends or family here in the US," Kelly said. "And then those people will turn around and ship them to Hong Kong or the mainland."

Kelly said media coverage has raised the company's international reputation. "We've had people visiting Chicago who've just gotten off a plane, they've taken a cab to our store, their luggage is still in the cab. They came straight to our store from the airport," she said.

"They love the planet pieces. They'll order the sets to give out to each guest at a wedding."

A former administrative assistant for a sports-nutrition company, Kelly, 42, said finding a following in Asia was far from her mind when she launched Vintage Confections more than five years ago. Ironically, in its early days, the company's stock in trade was custom-made chocolate-dipped fortune cookies for baby showers or wedding receptions.

"We were making our own molds. We weren't buying the commercial molds," she recalled. "Requests keep coming in for custom hard candy. We kept trying to find a way to customize the hard candy experience."

She said she borrowed the idea of putting custom-designed edible images on lollipops from cakes. In 2012, her company began to make monogrammed lollipops as wedding favors and then lollipops with moustache images.

"My son, who was 15 at the time, said it would really cool if you put planets inside them," Kelly said. "So that fall, we sourced some images and put them up in our store. A month later a couple of sets sold and a few days after that, they went viral."

The planets come in sets of 10 and five flavors with the 10-flavor set, at $26.50, the most popular. The flavors are guava, cotton candy, marshmallow, blackberry and cherry. The other flavors are pear, key lime, strawberry kiwi, mango and tropical punch.

The pops' popularity has given the company a counterfeiting problem. Kelly said a company in China registered Vintage Confections' name and began selling similar-looking pops.

"They tried to mimic our pieces. They look like ours but you can tell they're not ours," Kelly said. "We spent a fair amount of money fighting that. Ultimately the brand has been strong enough," she said.