Red panda gets a name, at last

The San Francisco Zoo announced the name of its newest, and perhaps cutest, resident - a 10-month-old red panda on Wednesday.

"His name is Tenzing, after the famed Sherpa Tenzing Norgay, who scaled Qomolangma in 1953 with Sir Edmund Hillary," Kelly Gomez, a curator of San Francisco Zoo, told China Daily on Wednesday.

"The species is native to western China, the region of the Himalayan Mountains," she said.

Tenzing was born in the Sacramento Zoo in California, and was moved to the San Francisco Zoo a month and a half ago. He is about the size of a raccoon, red-coated with a ringed tail and white mask.

Tenzing has passed his 30-day quarantine and is preparing for his public debut this Saturday.

Zoo emeritus board member and Bay Area philanthropist Barry Lipman and his wife Marie won the naming rights with a $31,000 bid at the zoo's annual fundraising gala last month.

"I wanted to help the zoo in carrying out its goals of conservation and education," said Lipman.

He said by choosing Tenzing, he hopes to bring about "inquiry and interest" in the Himalayas, its animals, its people, and the conquest of Qomolangma. 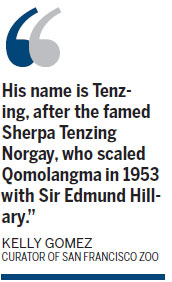 Curator said habitat loss is the greatest threat to red pandas, though they are also poached for their thick fur.

"Significant human population growth in the Himalayan Mountains has led to more farms, ranches and houses and created a great need for firewood," Gomez said.

"The huge demand for resources and land has a negative impact on the local forests resulting in a loss of suitable habit, nesting trees and food sources for red pandas," she said.

"The San Francisco Zoo is proud to contribute to the efforts of the red panda species survival program, which is working to develop long-term strategies to help preserve this remarkable species," she said.

Visitors are sure to be struck by Tenzing's extreme cuteness, which is emphasized even more by his outgoing personality, which is unusual for this normally solitary and shy species, she said.

"We are thrilled to welcome this charming animal to our zoo's family," said Tanya Peterson, president and executive director of the San Francisco Zoological Society.

"We hope that its presence here raises awareness of its vulnerable status as a species and helps our visitors connect with nature," Peterson said.