The idea of a show putting an audience to sleep usually horrifies theater directors. But Jim Findlay's surreal take on the epic Chinese novel Dream of the Red Chamber is a real sleeper.

Actually, it's a blend of sounds, images and live action based on Cao Xueqin's 18th century epic love story framed by metaphysical dreams. Defying the traditional notion of entertainment, the work at the iconic Brill Building in Times Square is designed to encourage the audience to fall in and out of sleep as it proceeds.

The red-sheeted cots and pillows for spectators reflect the production's mission. Further enhancing the dream-like state, audiences are permitted to arrive, depart and return at any time. Admission is free for this joint presentation of Times Square Arts and Brill Building owners Allied Partners and Brickman Real Estate. Performances run through Saturday, with Friday's performance running from 5 pm to midnight and Saturday's from 5 pm to 6 am Sunday.

"We'd been thinking about boredom as a component of art and performance," Findlay, who co-wrote the script with writing partner Jeff Jackson, told China Daily. And we thought if we made something so boring we could get the entire audience go to sleep, that would be some sort of victory. Usually, if you put the audience to sleep, it's defeat, right? We kind of turned the rules on their head. It fails if they stay awake."

Findlay and Jackson seized on Dream of the Red Chamber - a work Findlay said he fell in love with after first reading it 20 years ago - as the vehicle for this experiment. The 1791 novel is considered a Chinese literary masterpiece. Featuring more than 500 characters, it describes the rise and fall of author Cao's family and the Qing Dynasty. The "red chamber" of the title refers to the rooms in which the daughters of prominent families live. It also refers to a dream set in a red chamber where the fates of many characters are foreshadowed. Reality and illusion often intermingle in the book. 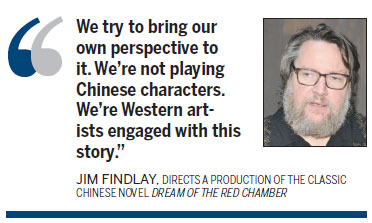 "We try to bring our own perspective to it," Findlay said. "We're not playing Chinese characters. We're Western artists engaged with this story."

The suspension of time was an important facet of the dream-like quality of the production; thus its fluid hours. "It's more like gallery hours," Findlay explained. "You can show up at 5 pm and stay till the end. But you can also show up at 11 o'clock for 45 minutes just to get a little fix. We've had a lot of audience members who have stuck their heads in out of curiosity and then come back the next night out of a deeper interest triggered by their initial curiosity."

Having free admission is "an extra amplification of the kind of openness that we've been trying to accomplish - to creative non-engagement by the audience," he said.

Sherry Dobbin, who directs Times Square Arts, the public arts program of the nonprofit Times Square Alliance, said the work's surreal character not only fit with the organization's mandate to push the artistic envelope 24 hours a day, but it also matched the persona of Times Square itself.

"Times Square is one of the few places left in the world that is 24-hours," she said in an interview. "It's like a dream. People leave Times Square with this sensation of having been in another world. They don't know if it's day or night." The Brill Building's mythic reputation as a pop-music songwriting hub in the 1950s and 1960s adds to the dream-like atmosphere, she said.

The production compresses Cao's 2,400-page book into 13 hours of potential performance segments that are juggled each night.

"We've made a deck of cards that determines the order of the show," Findlay said. "To try to sculpt (the story) as a director seemed folly for an audience that was sleeping. It seemed better to abandon it to some chance operation."

It's not necessary to be familiar with the book in advance to appreciate the show, he said.

Early in the piece's development, "we struggled with: 'How do we engage the audience to make them feel comfortable?'" Findlay said. "And what we discovered was people know how to sleep. If there's a bed and the lights are low, there's a good chance they're going to go to sleep."

Although snores occasionally emanate from the audience members scattered around the performance space in the Brill Building's basement, the sound doesn't bother the actors, Findlay said.

"It's sort of amusing when people snore," he said. "I don't think it's a problem. It just becomes part of your dream."

Xi: There is no gene for invasion in our blood

China: US must be objective about Asia tensions