China's top envoy in the United States believes that the US needs to rebalance its policy of rebalance to Asia.

In an interview with CNN's Christiane Amanpour, Cui Tiankai, China's ambassador to the US, said he is not questioning the intention of the US government. "I am looking at the effect, the results of the US policies toward Asia, toward China and what they have done and said recently," Cui said.

In China and much of Asia and even in the US, President Barack Obama's trip to Asia last month has been largely interpreted as having China as the target while the US has been eager to reassure its allies after Obama drew much criticism for missing his trip to Asia last October due to the partial shutdown of the federal government.

While the US said the rebalancing and the reassurance of its allies is not to contain and threaten China, many Chinese saw it differently especially when Obama pledged in Japan that the disputed Diaoyu Islands fall under the US-Japan Security Treaty.

"Let me reiterate that our treaty commitment to Japan's security is absolute. And Article 5 (of the security treaty) covers all territories under Japan's administration, including the Senkaku Islands," Obama said in a joint press conference with Japanese Prime Minister Shinzo Abe.

Many Chinese believe the US has been biased toward its allies in their maritime territorial disputes with China.

"And honestly, I think the key to this rebalancing is to maintain a good relationship with everybody in Asia-Pacific, including particularly China," Cui said. "And in this sense, I think this policy of rebalancing might need some rebalancing itself." 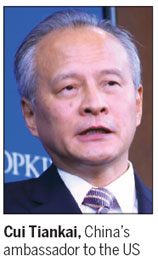 The ambassador said the Diaoyu Islands have always been part of Chinese heritage and it is China's sovereign right to defend its territorial integrity.

Cui said China is against the possibility of conflict and China does not want to see any conflicts in its neighborhood. But he added that it would not be entirely up to China. "Other people have to have the same constructive attitude and policy," he said, clearly pointing to some of China's neighbors, Japan, Vietnam and the Philippines, which the Chinese believe are trying to take advantage of the US rebalancing strategy to pursue their own gains in the South and East China seas.

The Chinese ambassador also provided facts that he said Western media have ignored in covering the recent dispute between China and Vietnam over China's drilling in the South China Sea.

The Chinese companies are operating only 17 nautical miles off a Chinese island, and it is 150 miles from the Vietnamese coast, according to Cui, referring to the Zhongjian Island, part of China's Xisha Islands.

Meanwhile, Vietnam is operating more than 30 such drilling operations, all in the disputed areas.

"Unlike our only one, we are doing it in undisputed areas," Cui said.

"We have only civilian ships, government ships there. But the Vietnamese have military vessels, armed vessels."

Since early this month, Vietnam has dispatched dozens of vessels and rammed Chinese ships hundreds of times. Anti-China riots in Vietnam have left four Chinese nationals dead and more than 100 other injured since May 13. Many factories have been vandalized.

Several thousand Chinese workers have been evacuated from Vietnam. Chinese travel agencies have canceled tours to Vietnam. Bilateral exchanges between the two countries have also been suspended.