Xinjiang will be focus of one-year, nationwide crackdown, ministry says

China will conduct a one-year nationwide campaign against terrorism after a series of violent and deadly attacks by terrorists and religious extremists.

The Ministry of Public Security announced the decision during a video conference with police chiefs around the country on Sunday.

It is urgent to cope with the complicated fight against terrorism and to ensure social stability and national security, he said.

The announcement came just one day after the Xinjiang regional government launched a one-year battle against terrorists.

It is the also the toughest measure that China has taken to fight terrorism after attackers killed 39 people and injured 94 at a morning marketplace in Urumqi on Thursday.

Hong Daode, a professor at China University of Political Science and Law, said that terrorism is a serious security threat in Xinjiang and is spreading to other parts of China. 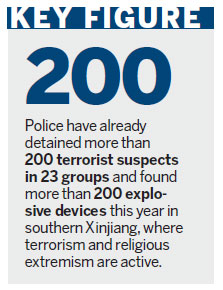 In Xinjiang, police launched a raid against terrorist suspects on Sunday morning and arrested an unspecified number of suspects.

So far this year, police have detained more than 200 terrorist suspects in 23 groups and found more than 200 explosive devices in Hotan, Kashgar and Aksu prefectures in southern Xinjiang where terrorism and religious extremism are active.

Xinjiang Daily reported that these suspects are generally in their 20s and 30s. They mostly watch videos from the Internet to learn how to make explosives and do physical training. They plan their attacks on social media platforms.

In 2013, the East Turkistan Islamic Movement, the main force behind the terrorist attacks, produced and publicized 107 multimedia products trumpeting violence and terrorism, according to Xinjiang's Public Security Department.

Nuriman Rouz, deputy head of Legal Affairs Forces at the Xinjiang Public Security Department, said almost all the attackers were influenced by religious extremism and watched videos related to terrorism.

Police will enhance supervision on express delivery, aiming to prevent the illegal transport of weapons, explosives and publicity materials, he added.