The $400 billion gas deal inked between China and Russia and the summit between Chinese President Xi Jinping and Russian President Vladimir Putin during a time of growing tension over the Ukraine between Russia and the United States has triggered hot debates about the changing triangular relationship between the three powers.

Zbigniew Brzezinski, the former US national security advisor under president Jimmy Carter, believes the Chinese-Russian relationship is not the preeminent global relationship. "It is the China-American relationship that is the globally preeminent relationship," he said on Monday at a seminar that explored the triangular relationship after the recent meeting between Xi and Putin.

Brzezinski described Russia as receding into a regional power. He believes the decline of Russia in the triangle boosts the influence of China and gives China the option of utilizing Russia whenever convenient.

At the same time, he believes China, out of caution and strategic intelligence, will not associate with Russia too much.

The 30-year Russian gas export deal clinched on May 21 after 10 years of negotiation is believed to be prompted by Russia's strained relationship with the US and the European Union following their geopolitical fight during the crisis in the Ukraine.

The deal will see Russian gas flow to China from a pipeline in Siberia, up to 38 billion cubic meters a year, for 30 years, starting in 2018.

Brzezinski said whether the US maintains a posture that enhances the US-China relationship is vital because it will impact on the Chinese-Russian relationship.

In Brzezinski's view, China and the US have not acted as skillfully and as intelligently lately, noting his reservations from the very beginning of President Barack Obama's pivot to Asia speech that put way too much emphasis on the military shift to the region and the implicit message about containment.

He also expressed disappointment at Obama's recent speech at West Point in which he pointed a finger at China several times. He said the US has to be more careful in making an "ambivalent assessment of the Chinese role in the world".

Both Obama's pivot to Asia policy and his West Point speech have drawn sharp criticism from China.

He was talking about China's principle of a relationship that seeks no alliance, no conflict and nothing directed at a third party.

Rudd, a fluent Chinese speaker, believes that many in China have concluded that it has been contained by the US. "In part it explains China's behavior in the triangle relationship," he said.

Rudd cautioned people not to oversimplify the complicated relationship despite the shift in the China-Russia relationship since the early 1970s when Richard Nixon visited China. 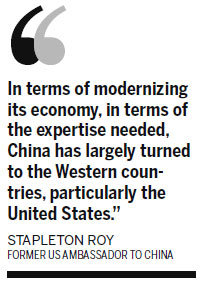 Stapleton Roy, the former US ambassador to China who worked in Moscow during the height of the Cold War, said neither China nor Russia like a world dominated by a sole superpower, and the recent developments in East Asia and Europe have pushed China and Russia closer together.

While China has benefited from cooperation with Russia in areas such as military technology, Roy believes the $500 billion annual trade between China and the US, compared with under $100 billion between China and Russia, means a more significant China-US relationship.

"In terms of modernizing its economy, in terms of the expertise needed, China has largely turned to the Western countries, particularly the United States," Roy said.

"There is no question that the Sino-Russia relationship is now at a high point, but I don't think China has lost sight of the fact that the United States is much more important in its ability to achieve the great rejuvenation of the Chinese people, which Xi Jinping put as the Chinese Dream," said Roy, who was born in China in 1935 to a missionary father.

Christopher Johnson, a senior advisor and Freeman Chair in China Studies at the Center for Strategic and International Studies (CSIS) and a moderator for the talk on Monday, believes it's important that the Chinese are calling for a new type of major power relationship, but only with the US, not Russia. "That says something about how they (Chinese) see that triangle developing these days," Johnson said.

Chinese IPOs lead US offers in returns by 19%