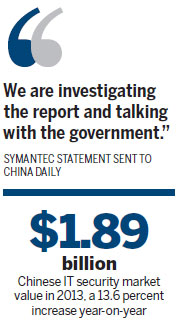 Security software firm latest US company to be banned by govt

Symantec Corp, a United States security software company, was added to the latest do-not-use list by the Chinese government because of product vulnerabilities that may lead to information leakage.

Analysts argued China may find it difficult to replace Symantec's products because of a perceived technology gap.

Symantec dismissed the claims, saying its products do not have loopholes.

"We are investigating the report and talking with the government," said a company statement sent to China Daily on Thursday evening.

"Symantec has a loophole detection team to ensure product safety," it said.

Although the government document was not confirmed as authentic, it is clear China is entering an era when it will favor more homegrown information technology products and services.

"In the DLP market, Symantec is a solid No 1 with big technology advantages," said Wang, adding that the company's software can actively detect external threats while Chinese companies are still working on encryption methods, a passive protection technology.

The technology gap between US security companies and their Chinese counterparts is about three years in the DLP sector, Wang said.

Since Symantec entered China in 1998, the company has forged a deep partnership with Chinese IT manufacturers, including Huawei Technologies Co Ltd and Lenovo Group Ltd. Earlier this year, Symantec united with Lenovo in developing security services for the Chinese company's server products.

"The government's move of ousting overseas software will help local companies to gain market share," said Zhang Yumu, vice-president of Rising. In mid-May, China announced it was reviewing foreign-made IT products because of cybersecurity concerns.

According to IDC data, the Chinese IT security market was worth $1.89 billion in 2013, a 13.6 percent year-on-year increase.