Iris Chang had a dream: to make the public aware of Asia's history during World War II, especially the Nanking Massacre. That dream ended when she died in 2004, but her parents continue to fulfill it, Chen Jia reports from San Francisco.

Chinese American Iris Chang had an unfinished dream when her life was tragically cut short on Nov 9, 2004, from a self-inflicted gunshot wound in her car in California.

Now, 10 years have passed and her parents have not stopped seeking to fulfill that dream.

"Iris's dream was to build an awareness of Asian history, particularly history of the World War II era, among the younger generation who had not experienced the war years in China and Asia," Ying-Ying Chang, Iris's mother, told China Daily. "So that they may better understand the cruel lessons of history and hopefully will never have to see them repeated."

Iris grew up in Champagne-Urbana, Illinois, and graduated with a journalism degree from the University of Illinois.

As a distinguished historian and journalist, Iris sought to make the world know more about the Rape of Nanking, also as known as the Nanking Massacre. The six-week massacre and mass rape committed by Japanese troops started on Dec 13, 1937, the day that the Japanese captured Nanking (today's Nanjing). 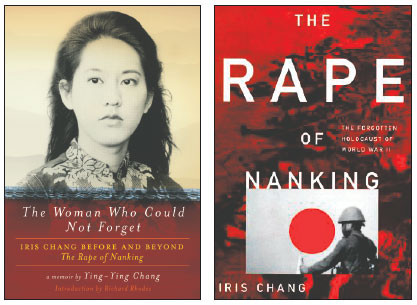 John Rabe, a German businessman who lived in the city between 1937 and 1938, wrote about his personal experience and observations of the massacre in his diaries. But those diaries were not available until Iris located Rabe's granddaughter, Ursula Reinhardt.

In January 1995, Iris started writing a book about the massacre, and two years later The Rape of Nanking was published in November 1997 to mark the 60th anniversary of the Nanking Massacre.

Her book had a huge impact on Western countries understanding the Asian side of World War II. Because the book was a New York Times bestseller in 1998, the Nanking Massacre became well known to the general public. The book has been translated into several foreign languages and was also an international bestseller.

The curator of the Nanjing Massacre Museum in Nanjing told reporters that almost all Westerners who visited the museum held a copy of Iris's The Rape of Nanking.

To her mother, Iris was passionately dedicated to addressing issues of social injustice and the violation of human rights all over the globe.

In an interview with a literary website in June 2003, Iris said: "It is important for me to write about issues that have universal significance. One that has resonated with me all my life has been the theme of injustice.

"Some people might dwell on love, other people on money or acquisition of great riches, but for some reason, I seem to be bothered whenever I see acts of injustice and assaults on other people's civil liberties."

For a year and a half after Iris took her own life - which her mother said was caused by the side effects of psychiatric drugs her doctors had prescribed - her mother could not bring herself to do anything.

"Then there was an inner calling: 'I could not live my life just like that. I told myself. I have to be strong,'" she recalled.

Continuing Iris's work has lifted her parents' spirit and has healed their sadness. They now live in San Jose in northern California.

With the help from members of the grassroots organization Global Alliance for Preserving the History of WWII in Asia (GA), Iris's parents established the Iris Chang Memorial Fund in the spring of 2006. 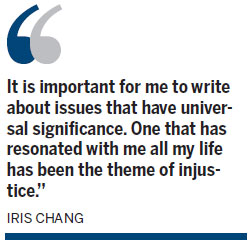 The fund sponsors American high school and college teachers for a summer study tour in China, which was administered by Canada-based ALPHA (The Association for the Learning and Preserving the History of WWII in Asia).

The teachers or educators participating in the tour had visited Comfort Women Stations in Shanghai, the Nanjing Massacre Museum in Nanjing, Unit 731 Museum in Harbin, and monuments to fallen soldiers in battles resisting Japan's invasion in Kumming, the capital and largest city in Yunnan province, southwest China, and elsewhere.

"The program aims to give American high school teachers first-hand experiences of the Sino-Japanese War history, and hopes they can bring this part of history back into American classrooms," Iris's mother said.

In 2006, Iris's parents held the first Iris Chang Memorial Essay Contest, and the title of the essay to be written was How Has Iris Chang's Book, The Rape of Nanking: the Forgotten Holocaust of WWII, Affected My Life and Thinking?

Close to 300 essays from 43 US states and many countries were received.

The winning essays were compiled into a volume entitled Iris Chang and the Forgotten Holocaust, which was published in 2007.

Again, the winning essays were put into a volume and published in 2008.

"From those essays, we could see that Iris's book had made a big impact on many people's lives and had truly penetrated into the public consciousness," Chang said.

In 2007, ALPHA, the grassroots organization in Toronto, raised enough money to produce a documentary movie entitled Iris Chang-The Rape of Nanking. Iris's parents were involved as consultants to the film.

In 2007, they also served as consultants for another documentary film Nanking, produced by former AOL Vice-Chairman Ted Leonesis and directed by Academy Award-winning director Bill Guttentag. Both men were inspired by Iris's book The Rape of Nanking.

The film was in memory of Iris, and it was on the short list of nominations in the documentary film category for a 2007 Academy Award.

Her parents also joined GA and RNRC (The Rape of Nanking Redress Coalition) and APTSJW (Association of Preserving the Truth of Sino-Japanese War), all based in the San Francisco Bay area and helped those organizations in their activities.

Each year around December 13, RNRC and APTSJW sponsor Nanjing Ji, a ceremony in memory of the victims and survivors of the Nanjing Massacre, which includes a photo exhibition of the Asian Holocaust and speeches to educate the general public about that part of history.

Chang's memoir in English about her daughter was published in 2011 after she spent seven years on it, and it was translated into Chinese in 2012 (both Complicated Chinese and Simplified Chinese).

"It's a long journey and I had been working very hard on the book alongside with other activities in the past several years," she said.

"The writing and publishing of the memoir enriched my life and confirmed my conviction: We should never give up the fighting for preserving the truth and justice!"

US south benefitting from China investment

Talks may help US soy exports

Unleashing the power of innovation

Beijing, Berlin getting closer despite distance