Li said that when Natalie Chou was 10 days old she was diagnosed with Human Respiratory Syncytial Virus (RSV), a condition that causes respiratory tract infections.

"At that moment, we thought we were going to lose her," said Li. "She has overcome her condition, that's why she's here. We're very blessed to have her here and to play the sport."

Li had rushed her to a nearby clinic, where they immediately put an oxygen mask on her and rushed to a nearby hospital, where she was revived, she said in an ESPN article.

Chou said she was very sick and that her mother thought it was impossible for her to be saved. "God blessed me to have this life," she said. "It was amazing."

Chou has been playing basketball since she was 4. She was on the winning team, Team USA for the International Basketball Federation (FIBA) Under-17 World Championship that took place in the Czech Republic from June 28 to July 6. In the final game, the USA team beat Spain 77-75 to win the gold medal.

"It's an amazing honor and a very good accomplishment to with the gold," said the 16-year-old Chou. "After I made the USA team, kids said that they wanted to be like me. I wanted to help inspire Asian kids to play at a high level."

Chou's mother, a former pro basketball player in China who competed for nearly a decade, trains her 6-foot-1 daughter nearly every day, so she can perform at her best. 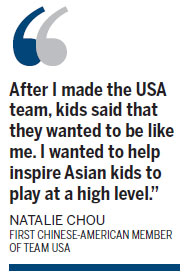 She said that it's an honor to have her daughter represent Chinese Americans in basketball and compete at such a high level.

"Everything I know is from my mom," said Chou. "After school, we go to the gym and work on my shooting. Sometimes we also train in a group, and I work on my footwork, dribbling and my fakes."

"She's a top skilled kid who works very hard," said Li. "She wanted to prove that she was good enough to make it onto the team."

As a sophomore at the Plano West Senior High School in Plano, Texas, Chou said that her biggest accomplishment when she was on the school's women's varsity team, was making the all-state team, which made it to the semi-finals of the state championship. During her freshman year, she was named newcomer basketball player of the year in Texas.

During her sophomore high school year, she scored an average of 17 points, compared to a t10-point average in her freshman year, and was named offensive player of the year, Li said in an interview with China Daily.

Kristen Perry, head coach for the Plano West Lady Wolves team, said that her first impression of Chou was her grace when she handled the basketball.

"I'm proud of Natalie," said Perry. "Players who are humble and talented are rare. She has all of that. From a mom's perspective, to watch her [compete at the world championship] made me very excited and proud. This happened to the right person at the right time."

Chou has matured since she first joined the team and has become a more vocal leader and developed court awareness, said Perry.

Li said that many top sports division one colleges are trying to recruit her daughter, including Stanford and Columbia University.

"She is a top recruited kid for her age," said Li. "We're going to take our time to do research for the schools and pick one that would fit her academically and basketball-wise."

Perry said that when Chou is off the court, she likes to sing and always asks to sing the US national anthem before a game and always is eating.

"Nothing is going to stand in her way," said the coach. "She will excel in college and move on to the WNBA. I can see her playing in the Olympics like how her mom did."