A woman from Portland, Maine has been convicted of embezzling more than $330,000 from a Chinese company that wanted to invest in a paper mill.

Flynn was charged with stealing money from Chinese company Guangzhou Dinson Engineering and Trading Limited (Dinson) between 2009 and 2010 that was supposed to be for the purchase of a paper mill in Baileyville, Maine.

Flynn and a business partner had formed Greentree Renewable Energy Inc to help finance the acquisition of the mill, despite having no prior business or management experience, court documents show.

In 2009, through a holding company, Dinson transferred $500,000 to an account where Flynn was the sole signer. But the sale eventually shuttered and Dinson requested that Flynn return the money less any fees from the bank, according to court documents.

A series of e-mail exchanges over a two month period shows that Dinson repeatedly asked Flynn for updates on the money and when it was going to be returned, only for Flynn to respond that there were problems with the bank due to national holidays and various logistical issues, such as problems with banking codes required for money transfers. 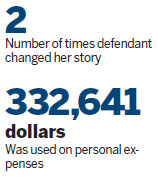 All the while, Flynn "was systematically withdrawing the funds from the Greentree account and depositing them in her personal checking accounts and into the account of an unrelated entity in which she had a 50 percent interest", court documents said.

She used most of the money on personal expenses, which included $20,600 for her daughter's tuition, $10,000 for her son's car and a $60,000 investment in real estate, said Leanne Robbin, the assistant attorney general who prosecuted the case.

A total of $332,641 was spent on personal expenses, documents show.

"At the time, Flynn had little of her own money. As soon as the Greentree account was emptied, Flynn ceased communication with Dinson or [business consultant Mike Martin who facilitated the sale]," said the court documents.

In depositions, Flynn defended herself by saying that she was suspicious that she would not be properly compensated for the sale, and thus kept the money for safekeeping.

"In the litigation, Flynn has asserted that she took the money for safekeeping because she suspected that Martin and Dinson were attempting to complete the paper mill transaction without compensating her and Greentree," said the court documents. "She introduced this theory after the paper mill seller changed its mind and sold the mill to Dinson in October of 2010 with Martin's assistance."

When Flynn was given documents showing how she used the money for personal expenses, she revised her account, saying she had been "acting on behalf of Greentree", lending herself the money, court deposition records show.

Jurors convicted Flynn last week after about an hour of deliberation, the Portland Press Herald reported. "They did not see this as a toughie, apparently," Robbin told the paper.

Flynn's attorney said that the jury's decision was an "unfortunate result to a very complicated case" and they will be pursuing an appeal, adding that the case should have been tried in civil court as opposed to criminal court, as there had been no criminal activity, the attorney told the Press Herald.