Xiamen Air gets its first Dreamliner

Boeing aircraft and Xiamen Airlines celebrated the delivery of the airline's first 787 Dreamliner at Boeing Everett Delivery Center on Aug 29.

"We are excited to receive our first 787 Dreamliner which is also the first widebody airplane of our all-Boeing fleet," said Che Shanglun, president and chairman of Xiamen Airlines.

"With the innovative technology and exceptional efficiency, the 787 Dreamliner will not only revolutionize the inflight experience for our passengers but is also the key to our further growth and international expansion."

The Boeing 787 is the world's most technologically advanced airplane with composite materials making up 50 percent of the primary structure by weight, including the fuselage and wing.

With the delivery of its first 787-8, Xiamen Airlines becomes the third Chinese airline to operate the 787. The airline will take delivery of the another five 787s by the end of 2015 and the first Xiamen 787 will initially fly flightsfrom Xiamen and Fuzhou to Beijing.

The carrier has grown into China'ssixth largest airline serving 218 domestic routes and 26 international and regional routes.

The airline will use the 787 on long-haul routes from itsFujianprovince base to Europe, North America and Australia.

"Our fleet will hit the 200-plane benchmark by 2020, but our goal is to evolve from a small regional carrier into a major international player in quality rather than in fleet size," said Che. 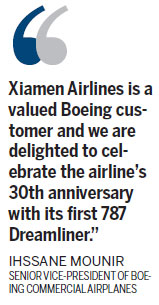 "Xiamen Airlines is a valued Boeing customer and we are delighted to celebrate the airline's 30thanniversary with its first 787 Dreamliner," saidIhssane Mounir, senior vice-president of Boeing Commercial Airplanes.

"We look forward to strengthening our partnership withXiamenas the airline continues to expand its global long-haul fleet."

Xiamen Airlines' rapid growth is testimony to the tremendous development ofChina'sairline business.At the end of 2012,Chinahad more than 40 airlines and the civil aviation industry as a whole had more than 2,000 airplanes.

Boeing projects investments of nearly$800 billioninChinafor 5,580 new commercial airplanes to be delivered during the next 20 years. The first 787 delivered to Xiamen Airlines is the 19th 787 that has been delivered to China by Boeing.

US urged to stop recon