Speaking at the general debate during the 69th session of the UN General Assembly in New York, Wang said the UN charter presented a grand vision of joint efforts to build a better world.

"We should treat each other as equals," said Wang. "The pursuit by different countries of economic and social development must be respected."

The foreign minister mentioned a number of hotspots - including conflicts in Gaza, Iraq, Ukraine and the Central African Republic and South Sudan - in his speech and stated China's stance on them.

"In the face of all those who are killed in war, we must ask ourselves: 'How can we keep these tragedies from recurring?'" said Wang.

"We should jointly initiate a new thinking for win-win and all-win progress and reject the old notion of zero-sum games or 'winner takes all'," he told the gathering.

Wang said when conducting mediation, the international community should uphold justice and take an "objective and balanced position" and promote national reconciliation.

"Countries should not be partial to any party in the conflict. Still less should they pursue their own agenda through their involvement," said Wang.

"Given their familiarity with local developments, we should leverage the strengths of regional organizations and countries and support them in addressing regional issues in ways suited to their region," said Wang.

Calling the Palestinian issue a "wound on the human conscience", Wang called on Israel and Palestine to secure a durable ceasefire, and urged Israel to lift its blockade on the Gaza Strip and stop building settlements.

"At the same time, the legitimate security concerns of Israel should be respected," Wang added.

As for the Korean peninsula, Wang said all parties should act in an objective and impartial way, remain committed to the goal of denuclearization of the peninsula and endeavor to resolve the issues through dialogue and consultation.

"The Six Party Talks remain the only viable and effective way to resolve the nuclear issue on the Korean peninsula," said Wang. 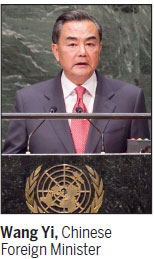 On the Millennium Development Goals - a set of development targets agreed by world leaders in 2000 - Wang said as the post-2015 development agenda will take over this historical mission next year, the international community should build on past progress and break new ground, and adopt more effective plans and take more robust action to advance the common development of mankind.

"As a good brother and good partner of Africa sharing weal and woe with it, China will continue to stand firmly with the African people, and support and assist them to the best of its ability. We will also take an active part in the relevant international assistance efforts," said Wang.

Jon Taylor, aChinawatcher and a political science professor at the University of St Thomas in Houston, said Wang's remarks reflected both China's pursuit of the Chinese Dream of national rejuvenation and China's belief that the world is now multi-polar and has multi-great powers.

"Wang underscored China's long-time commitment to national sovereignty and territorial integrity, emphasizing that China believes that all nations' rights to economic and social development must be respected," said Taylor.

Zhiqun Zhu, director of the China Institute at Bucknell University and author of US-ChinaRelations in the 21st Century, said while China is more involved in international issues and taking on more responsibilities as a developing country, the expectations of China from other countries have also risen.

"Many think China is no longer a developing nation and want China to do more and even play a leadership role," Zhu said.

"This discrepancy between China's ability and willingness and external expectations will be a new challenge for China's diplomacy," he added.

"Regarding development issues, China has recently taken on a larger role, especially in Africa, where its involvement has grown tremendously in the last decade," said Hardy-Chartrand.

"The world should expect China to continue playing a large role and provide its expertise in the post-2015 development era," he said. Wang finished attending the UN General Assembly on Sept 27 and will co-host the sixth Meeting of the China-Mexico Intergovernmental Standing Committee in Mexico from Sept 28-30. He will visit the United States from Sept 30- Oct 2 at the invitation of US Secretary of State John Kerry.