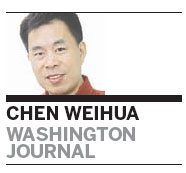 "The US, China and African countries all share distinct economic objectives in the region, and a 'trilateral' approach, which would accentuate cooperation in a number of areas, has significant potential to support Africa's longstanding development goals," they said.

The two believe that the opportunities to cooperate are especially promising given that recent analyses of trading patterns indicate that US-Chinese commercial competition might be overstated, both in and outside the oil and gas sectors.

They quoted former US ambassador to Burkina Faso and Ethiopia David Shinn as saying that "Africa is an ideal location for the United States and China to reduce mutual suspicion and benefit Africa countries at the same time".

The promising areas for trilateral cooperation in the commercial sphere include supporting Africa's regional integration, joint work to address corruption and a mechanism to support commerce, they said.

He Wenping, a researcher in African studies at the Chinese Academy of Social Sciences, agreed that these areas for trilateral cooperation are important and worth pursuing, but she said the three parties could start from areas where there is more consensus, such as education, health and agriculture.

"At the first stage, education and public hygiene could be a good entry point for proving that the trilateral cooperation could bring benefit to Africa people," she said.

For example, He suggested that the US provides capital for building hospitals while China supplies medical professionals to train African doctors and nurses in fighting disease.

He called for creating a mood of friendship and mutual respect between China and the US in Africa, citing some pointed words at China from US leaders while visiting Africa.

In June 2011, Hillary Clinton, then US Secretary of State, warned of China's "neocolonialism" in Africa. Obama also hinted during his Africa trip in July that the Chinese are only interested in grabbing resources and not in helping create jobs or benefiting Africans in general, accusations experts described as a distortion of the facts.

Former US President Bill Clinton said last month that the US is lagging behind China in helping on infrastructure for basic economic growth there.

"So I won't argue that the Chinese are going to get a lot of goodwill," Clinton said while travelling with his daughter Chelsea in Tanzania.

"I don't necessarily think it's a bad thing for America if African countries appreciate both what we try to do to help their kids stay alive and what the Chinese do to give them better infrastructure and I think we've got to try to create a future that we can share with the Chinese, not one where everything is a zero-sum game," Clinton said.

US divided as Obama presses for Syria attack