More than 11 percent of Chinese adults may have had diabetes in 2010, with China becoming one of the most diabetes-prevalent countries in Asia, according to a new study published in the Journal of the American Medical Association on Tuesday.

"The estimated prevalence of diabetes in the Chinese population is very similar to the US population (11.3 percent), even though overweight and obesity are much more common in the United States," the study said.

Of the 98,658 Chinese adults surveyed who had diabetes, 30.1 percent were aware that they had the condition, and only 25.8 percent were being treated for the disease.

In an editorial accompanying the study, Juliana C. N. Chan, chair professor of medicine and therapeutics at The Chinese University of Hong Kong, wrote that the rate of diabetes in China is not slowing down, despite alarms sounded after a widely publicized study from 2007 showing the growing levels of diabetes and pre-diabetes in China. 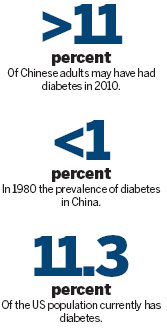 "Diabetes is a societal and a healthcare challenge due to complex interplays among genetic, perinatal, lifestyle, and environmental factors," Chan wrote.

"The lack of awareness, information, and feedback has caused many individuals unknowingly to engage in risk-conferring behaviors," she continued. "Even when the individual becomes aware of his or her risk conditions, the healthcare systems in many developing areas are not designed to manage and support a person's multiple health needs for 30 to 40 years or more."

Qi Sun, an assistant professor of nutrition at the Harvard School of Public Health, believes that China's economic boom is causing the country to undergo a dramatic lifestyle change, causing the uptick in diabetes rates in the nation.

"Before the boom, Chinese people generally had a more physically active lifestyle, biking from home to work," Sun said. "If you look at more economically-developed regions now, such as Beijing or Shanghai, people drive their cars no matter how bad the traffic is. Once they're home, they sit in front of their computers and surf the net.

"Then young people go out and have big meals on a weekly basis, and their diets now are high-fat and energy-dense," Sun continued.

In order to spread awareness about the disease, the government needs to step in to educate citizens, Chan said in an interview.

"There needs to be a multi-pronged tactic to bring awareness," she said. "Education needs to start from childhood. There needs to be warnings about high-energy foods that contribute to obesity, and the healthcare system must make preventative care affordable."

According to Chan, the Chinese hospital system could do better in making sure that in-depth information and education is available to diabetic and pre-diabetic patients.

"Doctors in hospitals are seeing so many patients a day, and they're only given a little time to look at each one," she said. "Patients with complex diseases aren't spending enough time with their doctors, so they're not given enough information."

Chinese patients also don't see diabetes as a matter of urgency, which Chan says comes from a lack of understanding about the disease.

"They don't know enough about health," she said. "'What does a healthy lifestyle mean? What are the signs of diabetes? What are the normal blood sugar levels? If I'm at risk, what should I do next?'"

US divided over Syria attack