China dominates the world in solar-panel manufacturing because it has established economy of scale and well-developed supply chains, according to a study by the Massachusetts Institute of Technology and the US Department of Energy.

The study found that those factors were more significant in China's domination of the manufacturing of photovoltaic (PV) than low labor costs in China. "The competitive advantage of China is not inherent; it is built and therefore can be equalized," the study said.

As of 2011, 63 percent of all solar-panel production worldwide was done in China, according to the study by researchers at Cambridge, Massachusetts-based MIT and the Energy Department's National Renewable Energy Laboratory (NREL).

The researchers estimated the costs for virtually all raw material, hours of labor, equipment and overhead in manufacturing creating PV modules.

"We developed a bottom-up model," said Tonio Buonassisi, associate professor of mechanical engineering at MIT and a co-author of the report, which is in the current issue of Energy and Environmental Science journal. "We added up the costs of each individual step." 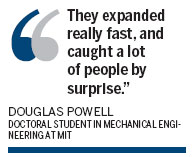 Buonassisi described the team's analysis as "very rigorous, it's down in the weeds. It doesn't rely solely on self-reported figures from manufacturers' quarterly reports. We really took great care to make sure our numbers were representative of actual factory costs".

One of the crucial parameters the study focused on was the minimum sustainable price (MSP), which is the total cost of manufacturing plus a sustainable profit margin. To that end, the team included not only the costs of making the silicon wafers that are then made into cells, but also included indirect costs such as research and design and supplier discounts, the non-technical costs not "always included in other analyses", Buonassisi said.

The MSP for most manufacturers was above current prices in 2012 and then China ramped up its capacity. "They expanded really fast, and caught a lot of people by surprise," said Douglas Powell, a doctoral student in mechanical engineering at MIT and co-author of the report.

China does have a small edge in labor costs, the study acknowledged, but it said that does not have a very significant impact in a production process as highly automated as PV module making. Wage savings give China a 7-cents-per-watt advantage over a US counterpart, but that advantage can easily be offset by regional factors such as inflation, according to the report.

Economy of scale is the main reason China can make solar panels for about 23 percent less than US companies, the study concluded. Noting that the typical Chinese PV factory is four times larger than a typical US plant, the study said such bigger operations can negotiate better contracts with suppliers and equipment can be used more efficiently because machines can be scheduled to run in sync with the various stages of the process.

What the study makes clear, Buonassisi said, is that China's edge in solar-panel production "can be replicated, if the right conditions are met".

Buonassisi emphasized that PV accounts for only a tiny fraction of the world's energy generation capacity today. Hence, he says, the vast majority of tomorrow's solar panels "has yet to be made and the story of photovoltaics has barely begun".

"China and the US share a common goal," he said. "Developing a low-pollution PV technology that is sustainably profitable to manufacture and deploy worldwide. Our descendants may well judge us by our ability to realize this future of great potential."

US divided as Obama presses for Syria attack