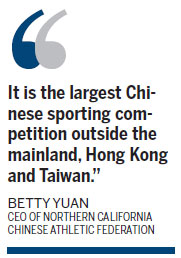 There were more than 3,000 overseas Chinese attending the event hosted by NCCAF, according to Yuan. "It is the largest Chinese sporting competition outside the mainland, Hong Kong and Taiwan," she said.

Twenty-seven local teams paraded into the stadium and performed at the beginning of the ceremony.

More than 1,000 athletes joined competitions in 11 sport categories, from soccer, volleyball, basketball and baseball to swimming, tai chi and tug of war.

Led by Consul General Yuan Nansheng, a team from the consulate general of China in San Francisco joined in the tug of war competition.

Yuan Nansheng praised the efforts of the overseas Chinese that made the event happen.

California Senator Ellen M. Corbett, who attended all 11 previous Chinese American Olympics, said: "It is truly amazing for us to celebrate Chinese cultural tradition. We know today is all about building families, tradition and a healthy future."

Carol Vernaci, mayor of Union City noted that it was very important for Americans to learn about Chinese culture. "Today's event showcases Chinese people's commitment to a healthy life style," she said.

Games are organized and managed by professional athletes. Organizers were looking forward to broken records in all of the events this year, said Yuan.

"We have this great opportunity to reconnect, and promote a healthy life and community relations in the spirit of the Olympics and our Chinese traditional values," she said.

NCCAF is the largest non-profit, non-partisan Chinese sports association in North America. Its goal is to unite Chinese communities in northern California by promoting cultural and sports activities for Chinese residents.