Some analysts are concerned over progress' meaning

Historic developments have been made in the process of China-US exchanges since former president Richard Nixon's landmark ice-breaking trip to China in 1972. The three Joint Communiqus issued by the two sides laid the political foundation for the relationship and will continue to guide the development of China-US relations.

While recognizing the great achievements in bilateral cooperation, some analysts are still worried that conflict between China and the US is possible, and increasingly likely.

John Mearsheimer, a professor at the University of Chicago, believes that if China continues its impressive economic growth over the next decades, the US and China are likely to engage in an intense security competition with considerable potential for war.

In The China Choice: Why America Should Share Power, Hugh White, professor of strategic studies at Australian National University, writes that if the two countries continue to compete for primacy in the Pacific, a new Cold War will be the result and he suggested that the US share power with China in the Asia-Pacific region. 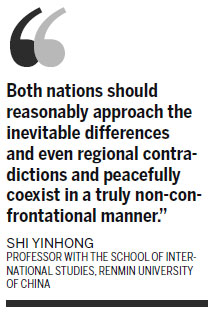 In terms of China-US relations, a major-country relationship first means the US truly treats China as a major country and shows corresponding respect, said Shi Yinhong, professor with the School of International Studies, Renmin University of China.

"Both nations should reasonably approach the inevitable differences and even regional contradictions and peacefully coexist in a truly non-confrontational manner. This will greatly expand common interests, and conduct more selective collaboration at bilateral, multilateral, and even global levels, so as to avoid harm to the world as well as to each other," Shi said.

Instability and resilience have been characterizing the China-US relationship since the two sides entered into official diplomatic relations 35 years ago. On one hand, the three main chronic problems regarding Taiwan, Tibet and trade still bother bilateral relations, while new challenges emerge one after another, such as cyber warfare and escalating tensions in the East and South China seas.

On the other hand, the two sides have established more than 90 dialogue mechanisms covering nearly all fields of bilateral exchanges, which are helpful explorations for China and the US to create a framework to manage the growing complexity of bilateral, regional and global challenges.

"In the next decade, with the power gap between China and the US narrowing and the structural contradictions deepening, instability of bilateral relations will become more prominent, and friction and conflict between the two sides will mainly appear in East Asia", Yan said.

In an interview with The Economist recently, President Barack Obama said tensions and conflicts between China and the US are manageable while the US has to be pretty firm with China. This is not the first time Obama has vowed to get tough with China, which he believes is a "free rider".

Henry Kissinger suggested addressing bilateral differences with ingenuity and determination instead of blaming a putative adversary. However, with the US mid-term election around the corner, the Obama administration will continue to maintain its so-called tough attitude and measures against China on many issues.

"In the next decade, there will be more and more contradictions between China and the US, and it will be a tough decade, but the overall relationship is controllable," said Jin Canrong, a professor in international studies at Renmin University of China.

Looking forward to the future, the key decision facing both Beijing and Washington is to concert a genuine effort at cooperation. As President Xi Jinping said while delivering a speech at the opening ceremony of the sixth round of the China-US Strategic and Economic Dialogue, cooperation between China and the US will benefit the world, while the opposite would bring disaster.

China's holdings of US securities take a slight dip