Mei Baojiu, son of Peking Opera all-time great performer Mei Lanfang, has become more confident about the upcoming performances at the Kennedy Center in Washington on Wednesday and Thursday evening.

He got that feeling after a performance at the David H. Koch Theater in Lincoln Center in New York last week.

"There was a question mark before that performance, but the warm applause during our first interaction with the audience made me rest assured," he told reporters on Tuesday evening before a reception at the Chinese embassy in Washington.

The New York Times gave the performance a rave review.

The 80 year old came with a group of Peking Opera artists from the Jingju Theater Company of Beijing and Mei Lanfang Jingju Troupe to mark the 120th anniversary of the birth of his father Mei Lanfang. The tour covers just New York and Washington.

Mei Lanfang was the first Peking Opera actor to present the Chinese traditional art outside the country when he toured the United States in 1930, going to cities such as New York, Chicago and San Francisco.

During that trip, he made friends with people such as Charlie Chaplin and met Hollywood stars Douglas Fairbanks and Mary Pickford.

On Wednesday, the artists will present classic plays of the Mei School, including five operas: The Goddess of Heaven Scatters Flowers, Lian Jinfeng: Pierce of Mussel, Resisting Jin Troops, Farewell My Concubine, and Drunken Beauty.

The Goddess of Heaven Scatters Flowers was one of the most historically significant works by Mei Lanfang. Described by Mei as a messenger of peace, the goddess of heaven ascends above the clouds and scatters flower petals onto earth, showering mankind with love and joy.

A unique sword dance will be another highlight of the performance.

On Thursday, the artists will present Lady Mu Guiying Takes Command, a popular story about a legendary heroine in China's Northern Song Dynasty more than 1,000 years ago. 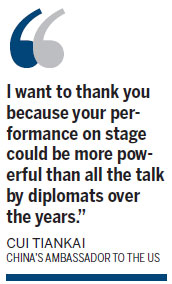 Under the invasion of Western Xia, retired general She Taijun sent her great grandchildren, Yang Wenguang and Yang Jinhua to the capital city to gather intelligence. Wenguang defeats Wang Lun, son of the treacherous official Wang Qiang, in a martial arts contest held to pick the marshal who will lead the army against Western Xia invaders.

Mu Guiying, Yang Wenguang's mother, has long held a grudge against the emperor. Persuaded by She Taijun and others, the patriotic general Mu Guiying agrees to lead the army in battle against the invaders.

Cui Tiankai, China's ambassador to the US, said Mei Lanfang's trip to the US in 1930 let the American people know about Chinese art and culture and the trip this time carried special significance since it's the 120th anniversary of Mei Lanfang's birth, the 80th birthday of Mei Baojiu and the 35th anniversary of China-US diplomatic ties.

"I want to thank you because your performance on stage could be more powerful than all the talk by diplomats over the years," Cui said.

In New York, he gave a lecture on Peking Opera at the United Nations headquarters last Thursday.

Mei said on Tuesday that he will also visit Russia, Japan and Europe, where his father also visited.

The group has already visited Taiwan, which Li Enjie, director of the Jingju Theater Company of Beijing, described as also the wish of Mei Lanfang, who died in 1961.

"Mei Lanfang hoped to visit Taiwan, but he never got a chance at the time," Li said.

Chinese chicken gets a boost