General Motors Co (GM) said it will invest $14 billion in China over the next five years and open five new manufacturing plants to increase annual sales to nearly 5 million vehicles in the world's largest car market.

Barra, GM President Dan Ammann and other members of the company's executive team, gave a presentation to investors and financial analysts at a GM facility in Milford, Michigan, that centered on some of the company's biggest initiatives through the end of the decade.

"This is a substantial investment in China," Dunne said Wednesday in an interview with China Daily. "GM is still among the forefront in China in terms of annual vehicle sales volume, and when people look at GM [in China] everyone is expecting vehicle sales to grow there. Competitors in the market are not standing still, so everyone is kind of on an accelerated pace."

GM was one of the first companies to establish an R & D center in China, so developing vehicles specifically for the China market has also given GM a bit of cachet with different entities in China, Dunne said.

"GM and its competitors are investing in manufacturing, distribution, marketing and the R & D (research and development) aspect, and China is a hyper-competitive market so you can't let up because things can change very quickly," he said

GM's operations in China include two foreign enterprises, 10 joint-venture partnerships and more than 50,000 employees in the world's second-largest economy. 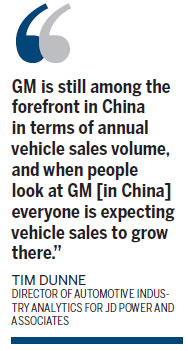 Barra said it is imperative for the company to be on the cutting edge of technological integration when it comes to their new models, so that GM can become the world's "most valued automotive company".

She also said some of the high-tech advances that GM plans to make - including the introduction of high-speed mobile broadband vehicle-to-vehicle connectivity in some models, and a highly automated, hands-free highway driving technology called Super Cruise - "unlock so many things that haven't been done in the past".

Dunne, with JD Power, said he was intrigued by GM's plans to introduce more technology into its vehicles in the near future.

"Nobody goes anywhere without being connected, so GM talking about introducing more connectivity in their vehicles is where the car market is going and it's spot on," Dunne said.

Michael Ward, a managing director with Sterne Agee, a Birmingham, Alabama-based brokerage firm, said GM "reconfirmed our expectations" during its presentation on Wednesday.

"GM hit on all metrics at its investor presentation in Detroit: product and earnings momentum, record results in North America, further upside in China and improved capital allocation to shareholders," Ward wrote in a research note released following Wednesday's event.

Despite some problems since the start of Barra's tenure in January, including ignition switch issues linked to the deaths of 23 individuals, GM's CEO said she remains optimistic that the company will be able to leverage its potential into increased business in a number of markets.

"When you look at General Motors, we have the resources, we have the technical talent and we have the global footprint," she said. "It's about execution and that's what we're focused on."

Identifying gaps is key to succeeding in Chinese market

Chinese FM urges enhancement of strategic trust with US