Chinese students have accounted for a growing percentage of international students in US universities and colleges, according to a report released Monday by the Institute of International Education (IIE).

Overall, the 273,439 Chinese mainland students in US universities and colleges during the 2013/14 academic year represent a 16.5 percent increase over the previous year. They account for 31 percent of all 886,052 international students in the US.

It is the fifth consecutive year that the Chinese mainland has retained the top place, after seven years of double-digit percentage increases. There are five times as many Chinese mainland students on US campuses as were recorded in the Open Doors Report on International Education Exchange 2000.

However, that growth rate has been the lowest since 2008/09, largely due to slower growth at the graduate level.

With increasing living standards, more Chinese parents can afford to send their children, often the only one in the family, for undergraduate education abroad. The US has seen an upsurge of undergraduate students from the Chinese mainland. They account for 40.3 percent of the total Chinese mainland students.

While there were 66,408, or 8 percent, more international students enrolled in US higher education compared to the previous year, students from the Chinese mainland and Saudi Arabia together made up 73 percent of the growth.

Peggy Blumenthal, senior counsel to the president of IIE, believes the new visa agreement between China and the US will be a boon for both Chinese and American students. Under an agreement reached a week ago during President Obama's trip to Beijing, the two countries have started to issue student visas valid for five years, instead of the previous one year limit.

"It will help a lot in making it easier for students to come to the United States, knowing that they can go home for vacations and holidays and come back without the need to renew their visas," Blumenthal said.

She described it as "a step to remove what could be a psychological barrier".

According to the Open Doors report, about 42 percent of the Chinese mainland students in the US study in the STEM (science, technology, engineering and mathematics) fields, while 28 percent study business, and the rest in other areas.

The report also showed that the number of US students who studied abroad for credit increased only 2 percent in the 2012/13 academic year to 289,408.

"International education is crucial to building relationships between people and communities in the United States and around the world," said Evan Ryan, US assistant secretary of state for educational and cultural affairs. "It is through these relationships that together we can solve global challenges like climate change, the spread of pandemic disease, and combating violent extremism."

Of the total US students studying abroad for credit back home, about 14,000 studied in China in 2012/13, down 3.2 percent from the previous year. This happened despite the 100,000 Strong Initiative announced by President Obama in 2009 to encourage more US students to study in China.

China is the fifth leading destination of US students studying abroad, behind Britain, Italy, Spain and France.

Blumenthal said this does not mean the beginning of a deep slide ahead and expects the number of US students to China to pick up again in coming years.

She believes that US universities and colleges like to move their study abroad programs around so students can get a chance to study in different cultures. As a result, more American students were studying in Japan and South Korea, though their total numbers there were far below the number of American students studying in China.

In 2013, international students contributed more than $27 billion to the US economy, according to the US Department of Commerce, including $8.04 billion from Chinese students. 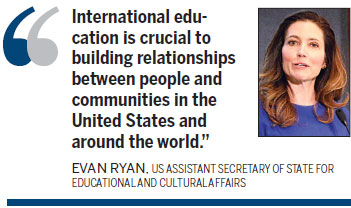 Chinese firms starting to think outside the box