China reduced its holdings of US debt in October to a 20-month low, and analysts' interpretation of the decline ranged from China being less inclined to participate in the foreign-exchange (FX) market to a positive development for the United States.

China held about $1.253 trillion of US debt as of Oct 31, down from $1.266 trillion in September but still the No 1 holder of US securities, according to data from the US Treasury Department released on Monday in its Treasury International Capital (TIC) report, which reflects securities bought and sold on a two-month lag. In October 2013, China's holdings were about $1.304 trillion.

Kent Troutman, research analyst with the Washington-based Peterson Institute for International Economics, said the decline in China's treasury holdings is due to several factors, including less intervention in the foreign exchange market.

"While I'd hope thisis a strategic decision, it may simply be due to the fact that they don't really need to. There simply hasn't been a lot of appreciation pressure. While the trade and investment inflows have certainly picked back up in the second half of this year, other portfolio flows (hot money) have been negative since March. This isn't necessarily a bad thing. Investors are justifiably concerned about the trajectory of the Chinese economy, and Chinese policymakers are committed to reform even if it means headline growth will slow - albeit still at 7 plus percent for now," he said in an e-mail.

Gennadiy Goldberg, US strategist at TD Securities USA in New York told China Daily in an email that China has gradually been allowing the yuan to appreciate against the dollar, requiring it to purchase fewer Treasuries. "Nevertheless, with the US dollar appreciating against a broad basket of currencies this year, China has had to continue its Treasury purchases to slow the relative appreciation of the yuan. This is evidenced both by the relatively flat monthly holdings and ongoing increase in 'note and bond' holdings, which suggest that China has purchased $184 billion in longer-dated Treasury securities over the past year."

Even with a $13.6 billion decline in US debt holdings In October from the previous month, Troutman doesn't necessarily think that China is actively reducing its holdings.

"Even a reduction of $10 billion in one month is very small for China. For this to become worrisome, we'd have to see persistent reductions of $30 plus billion every month. This seems unlikely at this stage. China is simply intervening less (if at all), and thus its need for US dollars will decline," he said.

"From the US perspective, this is a very positive development," Troutman added. "Demand for US treasuries from China puts upward pressure on the dollar, which is already experiencing a sustained secular increase. Therefore, any reduction - or even moderate sale - of China's demand for treasuries will likely be welcomed by the US."

China remains the No 1 holder of US debt. Japan is still second with $1.222 trillion in October, down slightly from $1.221 trillion in September but up from $1.117 trillion a year earlier. 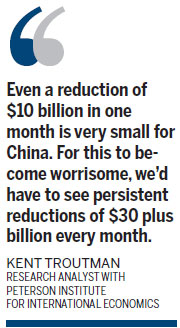 Obama: US re-establishing relations with Cuba

US moves to normalize relations with Cuba