Follow our live updates on the TransAsia plane carrying 53 passengers and 5 crew members that crashed in Taipei's Keelung River on Wednesday.

** 31 mainland tourists aboard, including 3 children, with 6 confirmed dead

** 31 confirmed dead with 12 others missing and 15 injured, altogether 53 passengers and 5 crew members aboard

Bodies of pilot and co-pilot of the wrecked plane were retrieved, according to Taiwan's central news agency. 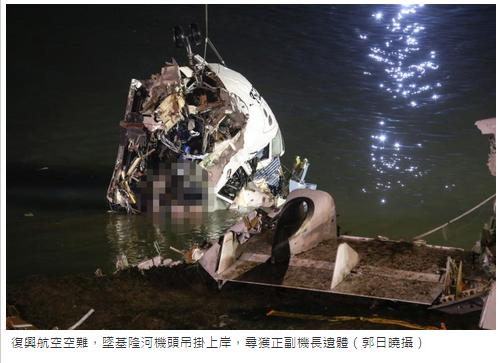 Another 12 remained missing and 15 injured, according to Taiwan's central news agency.

The wreckage of the aircraft was recovered from the river in New Taipai City, according to Reuters.

Another 17 remained missing, 15 injured, according to Taiwan's central news agency.

Rescuers used a crane to hoist the wrecked plane from a shallow river in Taipei.

Chinese President Xi Jinping has ordered obtaining accurate information on the TransAsia Airways airplane that crashed into a Taipei river on Wednesday as quickly as possible and providing assistance in treating the injured people.

Xi, also general secretary of the Communist Party of China (CPC) Central Committee and chairman of the Central Military Commission, also ordered caring for the relatives of passengers and properly manage other matters.

The Taiwan Work Office of the CPC Central Committee has sent a team to Taiwan to handle related affairs.