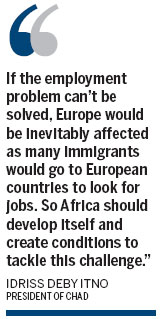 One of the biggest challenges for Africa is how to provide employment opportunities to its youth, the New York Forum AFRICA has heard.

"If Africa's youth is left without educational jobs, growth will be pointless," said host country Gabon's President Ali Bongo Ondimba at the three-day forum, which ended on Sunday in the capital Libreville.

"Young people will be without hope if they cannot find a place in our growing economies. Our countries' growth must be inclusive and people-oriented."

The forum gathered some 1,000 participants, including business leaders, politicians and decision-makers to discuss growth opportunities for the world's second most populous continent.

"If the employment problem can't be solved, Europe would be inevitably affected as many immigrants would go to European countries to look for jobs," said Idriss Deby Itno, president of Chad. "So Africa should develop itself and create conditions to tackle this challenge."

Deby Itno said Africa and its partners should make the best use of its natural resources to produce more value-added products locally and also construct more infrastructure, which would promote trade and business exchanges among African nations.

He added that China has pursued a complementary approach with African countries in this process, which was a real "win-win situation" and a mutually beneficial partnership.

"All the players and partners of Africa should act in a similar way," said the Chad president.

Gabon and Chad were joined by four other Economic and Monetary Community of Central African States (CEMAC) at the New York Forum on African development, being held in Libreville for the second consecutive year.

As African politicians make their voices heard on unemployment, Chinese investors are helping create jobs around the continent with new projects.

One major construction deal was signed during the forum after China Harbour Engineering Co's Cameroon operation won a public contract with the Gabonese government as part of Libreville's city center development.

China Harbour, which competed with other foreign companies for the contract, will build a waterfront, the first phase of a 14-month project, according to Zhao Yang, who oversees construction in Libreville. He said the project will create about 200 jobs

China Harbour established a presence in Sudan - their first office in Africa - in the 1980s and has now expanded to about 10 other African nations.

"It is our first project in Gabon and it's part of our regional expansion strategy to develop new projects in more African countries," said Zhao.

In another recently signed deal, Hong Kong Construction Materials Engineering Ltd will begin a $900 million project next year to build a "Chinatown" in Essassa, Libreville. The company will build 5,000 apartments for both government housing and commercial purposes.

Zheng Yuewen, chairman of China-Africa Business Council, which represents more than 200 Chinese companies - most of which are small and medium-sized enterprises - said China could play a significant role in tackling Africa's employment disparity.

"China is experiencing its industrial transition period and when more Chinese manufacturers from the private sector move their factories to Africa, millions of jobs will be created for African people," he said.

The council is the only Chinese non-governmental organization that helps Chinese enterprises deal with Africa-related business, aiming to promote China-Africa and South-South cooperation.

Zheng said it was mainly large-scale state-owned enterprises doing business in Africa, but in recent years, some individuals were embarking on business ventures across the continent.

"Private sectors from China could actually do a good job too, which is more suitable for the future sustainable development of Africa," Zheng said, adding that there were many good examples of private enterprises setting up in Africa, such as telecommunications equipment maker Huawei and PC maker Lenovo.

He said with the urgent need for technological updating and increasing labor costs, Chinese private manufacturers could view Africa as a good opportunity to grow their future business, while developing Africa in a more sustainable way.

"This is what China used to experience in the 1980s," he added, "And all the industries were eventually well established with the help of foreign direct investment."

This trend also conforms to African countries' real needs and policy changes, according to Sun Jiwen, Chinese ambassador to Gabon.

"Gabon used to export trees as one of its economic pillars, but the government has decided to completely abolish the raw material exportation by the end of 2017 and require a more value-added products export," he said.

Nightclub shooting kills one in Houston

US will not rush to war in Syria

Experts puzzled by state of economy