Wanda to build hotel in NYC 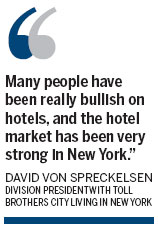 China's Wanda Group, which owns AMC Theaters, said it will invest $1 billion to build a five-star hotel in New York City, becoming a new addition to the recent Chinese investment in the Big Apple's real-estate market.

Wang Jianlin, chairman of the Dalian-based commercial real estate developer, told Reuters in Beijing that the company is in talks with potential partners for construction of a Wanda hotel and an adjacent apartment building in New York.

The chairman said the project will probably be announced in the third quarter of this year "if everything goes smoothly".

Wanda made headlines last year when it acquired US cinema chain AMC for $2.6 billion - including debt - making it the largest Chinese entertainment expansion in the US and the largest cinema owner in the world.

The Wanda group already runs a chain of five-star hotels and has partnered with other hotel groups. The move to build a five-star hotel in New York furthers Wanda's overseas expansion into the US since the AMC acquisition.

"Many people have been really bullish on hotels, and the hotel market has been very strong in New York," said David Von Spreckelsen, a division president with US luxury home-builder Toll Brothers City Living in New York. "It will continue to be a place within the US that is desirable and on a world level. Obviously it competes with every major city in the world."

Fred Lipman, partner at Blank Rome LLP, said the prices in the real estate market are a major attraction for Chinese investors. "The general perception is this is a good place to invest for real estate at this point based on the current pricing levels," said Lipman, author of International Strategic Alliances: Joint Ventures Between Asian and US Companies.

Wanda's move into New York is adding to Chinese investors' volume of real estate in one of the world's most desired cities. Data from the National Association of Realtors show that Chinese mainland and Hong Kong buyers are now the second largest investor group, after Canadians, in the US housing market, contributing to some $9 billion in the March 2011 to March 2012 period.

New York has long been a hotspot for foreign real estate investors. In the 70s, the Japanese made heavy investments in the city's real estate, said Spreckelsen. "There have been a lot of Europeans investing here over the last couple of years," he said, "and now I see the Chinese just being the next wave".

Spreckelsen cautions against foreign investors - including the Chinese - not having sufficient local knowledge before tapping into what he calls a "local game".

"Places like New York or Beijing are always going to be solid (for investment), but you need to hire the right people," said Spreckelsen, adding that knowledge of the local market, including the labor market and the government, were important for investors to carry out their projects smoothly.

Last September, Beijing-based Xinyuan Real Estate Co Ltd, a US listed company, acquired a parcel of land at Kent Avenue and South 8th Street in the Williamsburg section of Brooklyn for $54.2 million.

The company is constructing a condo building that will serve the community when it's complete, said John Liang, a general manger with Xinyuan in New York.

Liang said Xinyuan - even though it's a Chinese developer - won't be building a "Chinatown".

"We are building an international project and will be run perfectly local," said Liang recently at a China Roundtable discussion in New York, adding they are not relying on selling the condos to Chinese buyers.

The company, Liang said, recently raised $200 million and will spend half in the US market in the coming years.

"Williamsburg is a strong market. We've done a number of buildings there, and I think they will do well," Spreckelsen noted.

Lipman said even though the Chinese are building up investment in the real estate market, the result is still unknown. "You are working on the future projections; it takes time to see (the result)," he said.