Final 3 arrests made, call made for new laws

On Monday, State Department spokeswoman Jen Psaki said the US acknowledged that China has characterized the incident as a terrorist act.

"We extend our condolences for the loss of life. We of course oppose terrorism in all of its forms, and based on the information reported by the Chinese media, this appears to be an act of terrorism targeting random members of the public," she told the daily briefing over the phone. The three remaining suspects wanted in connection with Saturday's Kunming terrorist attack have been arrested, the Ministry of Public Security said on Monday, as a call was made for a national law to combat terrorism.

A group of eight wielding large knives killed 29 people and injured more than 140 at Kunming Railway Station in Yunnan province.

Four male suspects were shot dead and one woman was arrested at the scene. The remaining two men and one woman were arrested on Monday afternoon, police said, without providing details.

The attack has been widely condemned by the international community, Chinese officials, political advisers and lawmakers, with at least one lawmaker saying a national anti-terror law should be enacted.

"China urgently needs a comprehensive national law to combat terrorist attacks, as threats from terrorists, especially those based in Central Asia, have become extremely serious," said Nayim Yasen, a deputy from the Xinjiang delegation to the National People's Congress.

Nayim Yasen will submit a motion to this effect to the National People's Congress, the country's top legislature, whose annual session begins in Beijing on Wednesday.

The Party chief of the Xinjiang Uygur autonomous region said on Monday that the anti-separatism battle is tougher than ever. "We should realize that the revival of religious extremism internationally has contributed to the complicated anti-terrorism situation in China," Zhang Chunxian said at a meeting of the Xinjiang delegation to the 12th NPC. "It has caused many terrorist attacks around the world."

He said Xinjiang, which borders Central Asian countries including Afghanistan, remains the main battleground and front line in the terrorism fight. 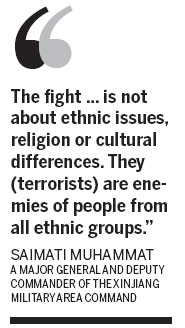 The Internet has become a new battlefield, as most of the terrorists involved in recent incidents have been influenced by information online, he added.

China's top leaders, including President Xi Jinping and Premier Li Keqiang, joined some 2,200 political advisers in a minute's silence at the opening ceremony of the annual session of the National Committee of the Chinese People's Political Consultative Conference in Beijing on Monday.

Saimati Muhammat, a major general and deputy commander of the Xinjiang Military Area Command, said counterterrorism arrangements are in place to prevent serious incidents in Xinjiang.

The armed forces in Xinjiang will never ease up on border controls, said Muhammat, who is also a member of the National Committee of the CPPCC.

He said Xinjiang has been upgrading supplies for border troops and has stepped up counterterrorism training for armed forces, especially special forces.

"The fight ... is not about ethnic issues, religion or cultural differences. They (terrorists) are enemies of people from all ethnic groups," he said. "The battle is complicated, harsh, fierce and cruel."

Michigan benefits from ties with Chinese