No standing in the way of 'progress'

The widespread removal of newsstands indicates official ignorance of the true nature and vibrancy of culture, writes Raymond Zhou.

Earlier this month, 72 newsstands in Beijing's Chaoyang district were dismantled. There were reports of sporadic scuffles between proprietors and those sent by the local authority to enforce the new rule.

Unlike many street peddlers, all of these newsstands were operating legally - with proper licenses and permits. They were given a month's prior notice to clear off because they were seen to be taking up crowded public spaces such as outside metro stations or next to pedestrian overpasses. 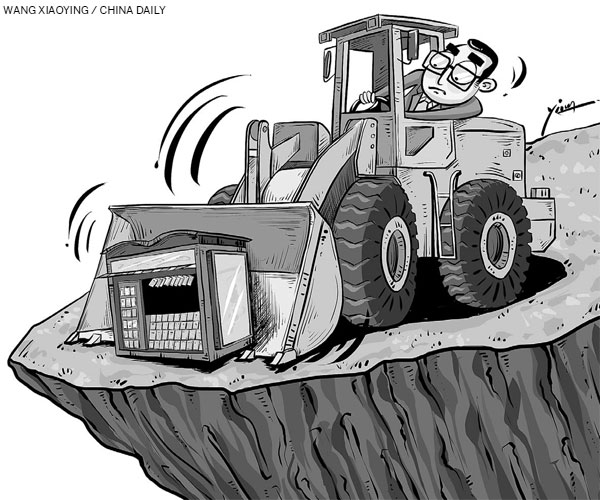 It seems local authorities have taken up a new definition of the fair use of public space. And Beijing is not alone. There have been reports of similar incidents in other cities in recent years.

You might have thought that those who were suffering from the daily crush would be applauding the moves, but no, they love the convenience of the stands.

Moreover, as voiced in the Chinese-language press, people overwhelmingly see such stands as signs of a city's cultural vibrancy.

City officials explained that many of these booths were simply being moved to "better locations", such as quiet streets where no danger exists of human traffic being blocked.

This shows a severe deficiency of business sense on the part of the city managers.

Who in his right mind would go out of his way to make an impulse purchase? Newsstands that operate in busy streets for the same reason warehouses are located far from downtown areas.

Unsurprisingly, those who meekly obliged with the relocation orders quickly found themselves in financial trouble and many folded after their incomes plummeted. 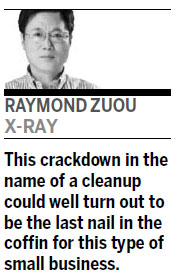 Even without such overzealous meddling from city managers, Chinese people's favorite spots for obtaining news in good old-fashioned print are fast losing ground to the corrosive power of digital technology.

About a decade ago, newsstands in Chinese cities were doing brisk business and each could support a family. Nowadays, sales have fallen so much that the stands either have to sell other merchandise or close entirely.

This crackdown in the name of a cleanup could well turn out to be the last nail in the coffin for this type of small business.

As a management tactic, this is very much in line with how Chinese cities deal with all kind of street vendors. From the perspective of city officials, street stalls selling trinkets, fruit or snacks constitute a major eyesore. They block traffic and litter abounds. So, they are to be kicked out by chengguan, literally "city management staff", a quasi-police force whose measures have been strongly criticized by the public - to the point that the word chengguan has become a catchall for hooligan-like people.

If you tour Hong Kong or Taipei, you'll come to the conclusion that the Chinese penchant for hustle and bustle does not have to come at the expense of blocked traffic or littered sidewalks.

Yes, there should be rules, but these rules should not be made to make life easy for city officials, but rather, easy for the public.

The operating hours and locations of these street stands can be calibrated to accommodate the neighborhood, the clientele as well as the businesses. Rules must be made by taking into account the needs and input of all sides affected by these businesses and once agreed, every party must abide by them.

Most commentators defend the newsstand owners from a legal or cultural distribution point of view. These are all valid, but the real danger lies in the singular take on culture and gentrification.

It doesn't matter whether such stands sell soup or soft drinks or newspapers, they exist because there is a real demand.

When so many prefer to make their purchases at street stands rather than in shiny shopping malls, it forms a lifestyle that is part of our cultural fabric.

In the eyes of some city managers, such booths are a reminder of a bygone era when poverty forced buyers and sellers onto the street.

The officials wanted to erase the humiliation by driving businesses into glittering high-rises. But in their eagerness for modernization, they forgot that some businesses can never afford to rent space in a mall, and that some customers prefer to buy certain things at a street corner.

This is not a hypothesis. A walk in New York or London or Hong Kong will quickly confirm the necessity of this much more primitive, down-to-earth way of conducting business.

Suffice to say, malls and boutiques have not supplanted the old ways, even though they have become the mainstream mode of shopping.

Not only is selling newspapers and magazines via street stands disparaged, but many other forms of grassroots ways of life are treated as vestiges of antiquity that should be abolished and cleaned up.

Take the history of local opera. The form sprouted from unglamorous rural entertainment and folksy rituals such as weddings and funerals. They were all "elevated" to the formal theater where many lost touch with their target audience and died away.

Once they no longer had the viability to sustain themselves, the government would usually step in and provide generous funding in an effort to put them on a life-support system. All in the name of protecting culture.

Other than antiques and relics, culture does not need protection so much as respect.

Culture as it happens is often messy. It may not have the validation of professors or UNESCO. It is essentially a way of life for a certain segment of the populace. If you artificially lift a cultural phenomenon to an inappropriate level, you'll risk breaking off its roots.

Take online fiction. It is booming and much of it is trash, but out of this plethora of online output there will be some gems.

The Writers' Association has been attempting to give it authenticity with memberships and professional guidance. It all sounds great, but if the measures are heavy-handed they will only hasten the demise of this literary sub-genre.

The market could be a much better arbiter than so-called experts for all their good intention.

Have you seen the automated libraries at Beijing's street corners? They look very fancy and I'm sure they are very expensive to build. But I have never seen a single person using them. I once spent half an hour visiting one and trying to figure out everything.

For a start, there is no rhyme or reason for the very limited selection of titles. Are they supposed to cater to the local neighborhood or migrant workers who can't afford to buy books? I can't make any sense of the titles.

But I must say the glass machines look very impressive and I can imagine city officials exclaiming, "This adds culture to our city!"

Once all the real newsstands are abolished, some experts will say they denote the level of a city's culture and city managers will take notice. Then expensive, automatic machines selling newspapers and magazines will be installed. But nobody will show up to buy the goods they offer.

By that time, everyone will have turned to digital reading. So the fancy booths will be like simulated ancient architecture that's currently on a building spree across China, while truly old houses are demolished.