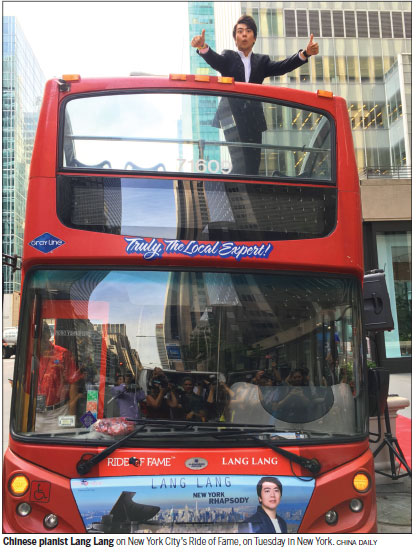 Inducted into the city's Ride of Fame, Lang was presented with a double-decker sightseeing bus decorated with his photo. He then inscribed a personal message on one of the seats, with his autograph and a smiley face.

"I'm so excited, today will be a very long and beautiful memory that stays in my mind forever," Lang told Xinhua News Agency at the induction ceremony outside Steinway Hall, where he delivered a crowd-pleasing live performance of Gershwin's "Rhapsody in Blue".

Earlier this year, New York City tourism officials announced a two-year city-to-city partnership with Shanghai, marking its first such alliance in China. Coinciding with the 2016 "US-China Tourism Year" designated by Chinese President Xi Jinping and US President Barack Obama, the partnership includes exchanges and the "sharing of best practices in tourism marketing," according to NYC & Company's website.

Christopher Heywood, the company's senior vice-president, said China was New York City's second-largest source of visitors (next to the UK) and a "crucially important market" for the city's tourism industry.

"We are confident that Lang Lang's ambassadorship will accelerate the growth even more," he said.

On Sept 16, Lang released his new album New York Rhapsody in homage to "the great city and the music it has inspired," according to Sony records.

Lang Lang said he would seize this opportunity and invite more friends from China to New York, a city that he said reflected a unique fusion of different cultures.

"We should put a piano here on the bus," said Lang. "And some Chinese barbecue!"