The urbanization drive crystallizes some major issues that badly need to be addressed, including imbalances in the country's factor market, the central-local fiscal relationship, and the delivery system for public services, Karlis Smits, a senior economist at the World Bank, told China Daily. 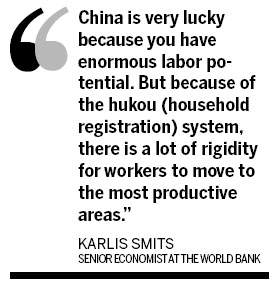 A real solution to the problems related to China's urbanization drive should be one that addresses the institutional root of these problems, he said.

For example in the factor market, which is essentially made up of capital, land and labor, China's system still prevents the free flow and competitiveness of these factors, which explains the layout of Chinese cities.

"If you are a local Chinese official, you will likely have your spare land developed into real estate projects such as shopping malls or industrial parks, rather than converting it to a park," Smits said.

"This is because real estate projects give you more revenue. By contrast, in the United States, local officials like to build parks because most of the local governments' revenue comes from property taxes, and a park lifts the value of the property," he added.

Local governments can make money simply from expropriating land from rural residents with artificially low prices and selling it to developers at much higher prices. This explains the sprawling development of many Chinese cities, Smits said.

The built-up area of China's cities has expanded by 83.4 percent from 2000 to 2010, while the country's urban population only increased by 45 percent in the same period, Hu Cunzhi, vice-minister of land and resources, said previously.

The oversupply of cheap land to the industrial sector has been a major driver of China's industrial development, which has reinforced the local governments' reliance on investment- and industry-led growth, Smits said.

"China is extremely competitive in the final-product market, because the market has been subjected to competition. But in the factor market, which leads to the final product, labor, capital, and land are traded internally and there's no competition," Smits said.

Simply blaming the local governments for this situation, however, is meaningless, because they live in an environment that responds to incentives. Without adjusting the incentives mechanism, local governments will continue to tilt toward this type of development model despite repeated guidance from the central government, he added.

A recent Chinese report said that in 2012, the taxes collected from property transactions totaled 1.01 trillion yuan ($160.3 billion), 20 times the level seen in the 2000s, while land transfer fees last year totaled 2.69 trillion yuan. The two sources made up 47.6 percent of the local governments' fiscal revenues.

On the one hand, local governments' revenues are largely driven by profits related to land transactions, while on the other hand there is a big discrepancy between local government fiscal revenue and spending responsibility, Smits said.

China's most serious fiscal disparities are at the sub-provincial level, which accounted for 60 percent of total public spending - including basic health and education, pensions, unemployment insurance, disability, housing, infrastructure maintenance, and minimum income support, but only received 34 percent of the tax revenue, according to a report released last year by the World Bank and the Development Research Center of the State Council, China's cabinet.