Fang Jinqi, 32, said the most urgent thing for her at the moment is to develop a more thrifty lifestyle because her job as a property agent business is stagnating.

The big fan of Hermes bags who used to buy a new one almost every two months said she has not done so for at least six months.

To make up for the loss of her hobby, Fang is now turning to cheaper cosmetics, such as lipsticks, which she said "can be easily picked up from chain stores such as Sephora".

Leonard Lauder, chairman of Estee Lauder Companies, said he noticed the sales of lipsticks experienced an usual rise during the economic deflation after the Sept 11 terrorist attacks in the US in 2001. Lauder said when the economy sours people are more willing to spend on smaller indulgences such as lipstick rather than splashing out on expensive luxury bags. It's a phenomenon known as the "lipstick effect" and has been recognized historically.

Professor of sociology Juliet Schor wrote in her book The Over Spent Americans, published in 1999, that anti-wrinkle cream, moisturizers, eye shadow and powders, lipsticks and facial makeup can provide "hope in a bottle" for people, especially women, who are "looking for affordable luxury, the thrill of buying at the expensive department store, indulging in a fantasy of beauty and sexiness".

In short, "Cosmetics are an escape from an otherwise all too drab everyday existence," she wrote.

But is the same thing happening in China?

China's GDP rose 7.8 percent in 2012, the first time that the country's growth rate fell to less than 8 percent since 1999. Its economy grew 7.7 percent in the first quarter of this year.

The country's Purchasing Managers' Index dropped to a nine-month low at 49.2 points in August last year. A figure below 50 indicates a contracting economy. Fan Junlin, an economics researcher at the Agricultural Bank of China, said in an interview with the Xinhua News Agency: "Weak external demand remains the biggest factor dragging down China's economic growth."

But as the industrial and manufacturing sectors declined last year, fast-moving consumer goods and fashion brands soared. According to the market research firm Euromonitor International, the entire retail value of the beauty and personal care sector in China grew from 184.1 billion yuan ($30 billion) in 2011 to 202.1 billion yuan in 2012. L'Oreal Group saw its market share grow 11.2 percent in 2012 from 10.8 percent a year earlier. Shiseido Co and Unilever Group have both seen a 0.1 percent increase in terms of market share.

A survey of the global retail market released by the consulting firm A.T. Kearney showed China moved up from sixth place in 2011 to third place in 2012. It predicted the growth rate of China's retail sales revenue will double by the end of this year despite rising labor costs and rents. 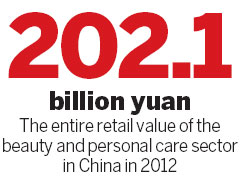 Conversely, luxury brands saw their growth slow down in China in 2012 after years of astonishingly rapid rises in sales. According to the US consulting firm Bain & Co, the growth rate in the Chinese luxury market fell to 7 percent in 2012 from 30 percent in 2011.

Italian brand Gucci said at the beginning of this year it would maintain the opening of new stores in China at three to four a year. At its height it was opening 10 to 15 stores annually. Bernard Arnault, chairman and CEO of luxury brand LVMH, said on Jan 31 that Louis Vuitton will not open boutiques in second- and third-tier cities in China in an attempt to avoid over-exposure.

According to Nick Debnam, Asia-Pacific chairman of consumer markets at KPMG China, the lipstick effect is an economic phenomenon where even when luxury spending slows, the spending on cosmetics tends to hold up pretty well. Cosmetics are relatively affordable compared with other luxury items and while people delay their bigger ticket luxury purchases, for cosmetics there is less deferral, or "switching of buying habits".