Changyu branches out into the UK 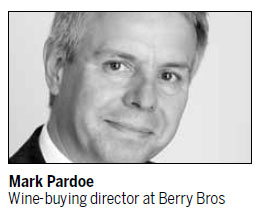 Britain's oldest wine merchant has announced that it will permanently stock four wines produced by a Chinese winemaker, a milestone for the winemaker's emergence onto the world stage.

Berry Bros, founded in 1698 and a supplier to the royal family, is the first big British retailer to stock Chinese wines permanently, following Le Groupe Castel of France and Delhaize of Belgium in recent years.

Mark Pardoe, Berry Bros' wine-buying director, expects the Changyu wines to attract the curiosity of Britain's wine lovers, who have historically been interested in wines from new regions.

"The UK wine market is one of the most diverse in the world because the UK does not have a big wine producing industry," Pardoe said.

"So when a new wine-producing region starts to appear, people are always very interested."

"Different from most other wines produced in China, Chateau Changyu Moser XV is developed for the export market," Pardoe said. "We've made sure it suits the European palate."

Chateau Changyu Moser XV is developed in the Ningxia Hui autonomous region jointly between Changyu and the Austrian winemaker Lenz Moser, whose family has run wineries for 15 generations.

Moser, who founded the wine brand development agency TxB Fine Wines, originally ventured to China in 2005 with a view to exporting European wines to China. Instead, he realized the potential of Chinese wines.

His company has since worked extensively with the Changyu team to develop wines suitable for the European standard, of which Chateau Changyu Moser XV is one.

Pardoe said the grape varieties of cabernet sauvignon and merlot are originally from Bordeaux.

They were planted by Changyu when it was founded in the 1890s, but initially the crops did not grow very well.

When Moser went to Changyu, he identified the best pockets of the grapes out of what was available, and helped grow them the Bordeaux way, Pardoe said.

This new method of pruning the crops reduced the number of grapes produced to just a quarter of the previous quantity, to ensure the harvested grapes are more "concentrated and flavorsome".

"When the vines are dormant in the winter, you cut them to give you the number of branches you'd like to grow each year. But later on, if the branches grow very fast because of weather conditions, you have to cut them more."

After the grapes are harvested, Moser's team ages them for 12 months in oak barrels of 225 liters each, to produce a robust and full-bodied wine. These barrels are produced in France and imported by Changyu.

Pardoe said the difference in taste between Chateau Changyu Moser XV and other Bordeaux wines is subtle. "The climate in Ningxia is warmer and drier than Bordeaux, and the sunlight is stronger, therefore the wine has a more savory character. In comparison, the Bordeaux wines are fruitier, fresher, and drier."

Meanwhile, the three ice wines Pardoe picked to complete the collection are developed by Changyu in Liaoning province for the Chinese domestic market, with help from Aurora Icewine Co Ltd, the biggest ice wine company in Canada.

"To make ice wine is very difficult because they have to be harvested in a temperature that is -8 C, which Liaoning has on a predictable annual basis."

There will be a slight difference between the three ice wines. Gold Label is a light wine with citrus, tropical fruits, blossom and honey flavors, Blue Label has spicy honey, lychee and pear aromas, and Black Label contains apricot, pineapple and vanilla flavors.

Pardoe said that Berry Bros will initially import 100 cases of the three ice wines altogether and another 100 cases of the Chateau Changyu Moser XV, but will continue to order more when the first batch sells out.

The wines will arrive in Britain in June, he said.

Changyu is no newcomer to the world of wine. Founded by Zhang Bishi in 1892, it has grown to be one of China's best-known producers.

By 2016 Changyu plans to open a "wine city" in Yantai, Shandong province, covering an estimated area of more than four square kilometers and costing about 6 billion yuan ($979 million).

Comprising a research institute and wine-production facilities and vineyards, it will feature a European-style village, two wine and brandy chateaux and an international wine trading center.

Changyu's first entry into Europe was in France, where it was distributed by Castel. But it failed to attract repeat orders because of inconsistent quality, according to a report by the wine specialist media China Wine News.

Last summer the British supermarket Waitrose added a Chinese wine and a Brazilian wine to its collection at a promotional event during the Olympic period, and Chateau Changyu cabernet gernischt was chosen.

Although Waitrose did not continue to stock the wine after the trial, a spokesman told the wine magazine Decanter that the cabernet gernischt was selling out "quickly, much faster than we expected, and we were thrilled with our customers' reaction to this new and unknown wine".

Pardoe said that Berry Bros' collaboration with Changyu is an important statement about the potential of Chinese wine. "This is just the tip of the iceberg," he said.

China is the eighth-largest producer of wine in the world and is forecast to be sixth-largest by 2016. Wine consumption in China has more than doubled in the past five years, and China is expected to become the second-largest wine consumer by value by 2016, up from third place today, according to Vinexpo, a wine industry trade fair.

Over the years, many foreign wine brands have established joint ventures with Chinese brands to produce wine for China's local market. But very little of this is exported overseas due to both a lack of brand awareness and a lack of financial motivation when demand in China's burgeoning domestic market is already hard to fulfill.

Pardoe said its cooperation model with Changyu is unique because it develops wine specifically for the European market. Looking to the future, he said, Berry Bros is willing to develop more wines with Changyu and other Chinese producers to help Chinese wine brands go global.

"As a high-quality wine merchant, our job is always to demonstrate the diversity and complexity of what is available in the world of wine, and the arrival of Chinese wines onto the world market is an important milestone."