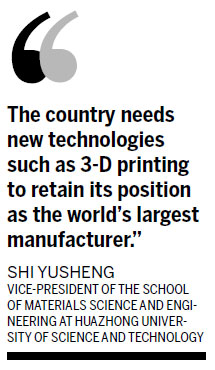 Revenues for the three-dimensional printing industry in China are likely to reach 10 billion yuan ($1.6 billion) within three years, making the country the biggest market worldwide, industry experts have predicted.

"China is the market with the greatest potential and demand for this new technology," said Luo Jun, CEO of the Beijing-based Asian Manufacturing Association.

"What we need to do now is to integrate 3-D printing technology with an ongoing industrial transformation and upgrade," he said.

AMA figures suggest that the average global growth rate for the 3-D printing industry is 25 percent year-on-year, and the market worldwide could be worth $5 billion by 2016.

"With government backing, the industry in China is on track to expand tenfold in the next three years, with the creation of around 10 3-D printing centers expected."

China's 3-D printing industry generated revenues worth around 1 billion yuan ($163 million) in 2012 while total revenues outside of China hit 10 billion yuan, according to AMA figures.

The top market for the industry is the United States, which is responsible for 60 percent of output, while Japan, Germany and China each generated about 10 percent, it said.

3-D printing, or additive manufacturing, has been around for about 25 years, but it only caught the public's attention in the past couple of years as the ability to create quality, cost-effective three-dimensional solid objects improved.

But experts say the future of 3-D printing rests on major business use, rather than the printing of toy dolls or cellphone cases.

Graham Tromans, chairman of the United Kingdom-based Additive Manufacturing Association, predicted that the creation of larger industrial devices for major and business use will propel China to No 1 in the global market, most likely within the next five years.

Shi Yusheng, vice-president of the school of materials science and engineering at Huazhong University of Science and Technology, said that China's vigorous moves in upgrading traditional manufacturing will also fuel growth in the industry.

"The country needs new technologies such as 3-D printing to retain its position as the world's largest manufacturer," said Shi, adding that costs are expected to fall, as manufacturing efficiency and product quality rise, particularly in aviation, auto manufacturing, and other heavy industries.

However, some overseas experts said it might take a while still for China to lead this emerging industry.

"It's an ambitious plan for China to grab the top position," said Terry Wohlers, president of Wohlers Associates Inc, which is considered the leading researcher on the industry.

Wohlers warned that experts from almost every nation are working all-out to create new technology, at a time when economies are struggling - but he added that the future industry will be "very, very big" because the current scale remains small.