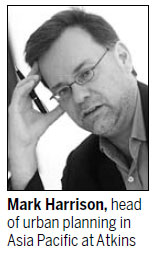 US diplomat lays out vision for East Asia

China in $270b oil deal with Russia

US files charges against Snowden

Foreigners in Tianjin find a fresh goal to aim for