More than 600 years ago, the legendary Ming Dynasty diplomat Admiral Zheng He made seven epic journeys to the West via a route known as the maritime Silk Road.

First used in the Qin and Han Dynasties (AD 25-220), the nautical passageway connected the ports of south China to Southeast Asia, India, Arabia and Africa. Silk, china, tea and spices exchanged hands from Guangzhou, the starting point, to the countries around the Gulf. 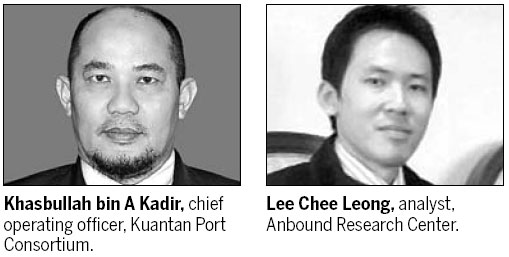 Now, China is proposing to rebuild this centuries-old seaway into a 21st century maritime Silk Road. Kuantan, on the east coast of Peninsular Malaysia, is hoping that modern day Chinese vessels will share Zheng's assessment when he landed here in the 15th century: that this city facing the South China Sea is an ideal gateway to the region and beyond.

Located 250 kilometers from the capital city of Kuala Lumpur, Kuantan is the east coast's economic hub and its most modern city; although by no means as cosmopolitan as its west coast sisters. The capital of the state of Pahang is being developed into an integrated logistics and industrial hub for the East Coast Economic Region (ECER), a major project by the Malaysian government to decentralize economic activities.

Crucially, it provides fast access to China through its namesake port. The multipurpose, deep-sea port serves the resource-rich hinterland of the east coast and is a leading petrochemical hub port and container terminal for that part of the peninsula.

"We offer the shortest, quickest and most direct route between Malaysia and the ports of the Far East. The shipping community stands to benefit in terms of cost and reduction in shipping time," says Khasbullah bin A Kadir, chief operating officer of Kuantan Port Consortium, the port operator. He adds the sailing time between the port and China is a mere four days.

"Kuantan Port is one of the ASEAN ports that make up the wider connectivity network of regional ports," notes Lee Chee Leong, an analyst with think tank Anbound Research Center, referring to the Association of Southeast Asian Nations.

"Because China has yet to secure any tangible agreement for port use in the South China Sea, developing Kuantan Port will give another option to China in terms of opening a new shipment route between China and ASEAN in the contentious sea."

The Malaysian government, which is trying to correct a gaping trade imbalance, is hoping this proximity and Kuantan's strategic location between China and the rest of the region will be major draws for Chinese companies.

It will be taking up a linchpin role in realizing Malaysia's aspirations with investments to the tune of billions of ringgit in the Malaysia-China Kuantan Industrial Park (MCKIP) and Kuantan Port, which is 5 km from the park.

MCKIP is the sister park to the China-Malaysia Qinzhou Industrial Park (QIP) in Qinzhou, China, and the first industrial park in Malaysia to be accorded national status.

"MCKIP and QIP will take Malaysia-China relations to greater heights as they will play a synergistic role in enhancing bilateral trade between both countries," Khasbullah explains. "A distinct and competitive supply chain would emerge between both sister parks, resulting in a cross-border movement of manufactured goods with the Kuantan and Qinzhou ports serving as trans-shipment hubs to redistribute goods to markets around the world."

The park is being jointly developed by a Malaysian consortium of public and private sector companies and a Chinese consortium, of which Guangxi Beibu is a major shareholder (the other partner is the Qinzhou Investment Company). The Chinese have a 49 percent stake in the joint venture.

At the launch in February by Najib Razak, the prime minister of Malaysia, the Malaysian leader said: "MCKIP is well-positioned to become a hub of high-end, export-oriented industries that would leverage its proximity to Kuantan Port. It promises opportunities for investors from China and beyond."

The two leaders witnessed the signing of five agreements between Malaysian and Chinese companies to kickstart the inflow of investments.

"Each of these signings point to a long and fruitful future for the MCKIP. The park has already attracted investment commitments worth 10.5 billion ringgit ($3.3 billion), creating 8,500 jobs," Najib noted.

Much of this is coming from Guangxi Beibu which will be investing in three projects within MCKIP. This will include 3 billion ringgit for the expansion of Kuantan Port, which is undertaken together with IJM Corp, owner of Kuantan Port Consortium; and 2.5 billion ringgit via the joint venture company developing MCKIP.

In September, the Chinese conglomerate spent a further 334 million ringgit to purchase a 40 percent interest in Kuantan Port Consortium from IJM Corporation.

The partners are currently expanding the port to enhance its position as a regional shipping destination and trans-shipment hub. With the construction of a new deep water terminal, Kuantan Port will have the capacity to handle 1.5 million TEUs (twenty-foot container equivalent units) and accommodate some of the biggest bulk carriers and container vessels in operation.

Khasbullah says that the partnership with Guangxi Beibu will bring best practices in port management given its experience from running four ports in China, while its network of clientele will enhance the capacity utilization of Kuantan Port.

"Guangxi Beibu's presence will make it easier to attract Chinese investors looking to invest in Malaysia. In addition, they will play an active role in attracting foreign direct investments (FDI), particularly from China, which would contribute positively to the volume of cargo handled by the port," says Khasbullah.

For starters, the Chinese group is required by the memorandum of understanding of investment it signed with the ECER Development Council to secure investments for an integrated steel plant, an aluminum processing plant and a palm oil refinery within MCKIP (the parcel of three projects). There is also talk of future investments in the oil and gas, and petrochemical industries.

China's inflation up 3% in Nov