Wichita, Kansas to Xi'an, China: Come fly with us

The travel distance between Wichita, Kansas, and Xi'an, Shaanxi province, China, is more than 7,100 miles, a trip that takes upward of 20 hours by plane.

But officials from the two cities are hoping that recent interactions involving the aviation industry will help bridge that distance just a bit, according to Wichita Mayor Carl Brewer.

"As China is getting ready to increase its air space and venture into general aviation, one of the things that we wanted to do was establish a partnership with them," Brewer told China Daily on Monday. "If you want to get into the industry, train individuals, fly planes, etc, then Wichita is where you need to be."

Delegates from Xi'an arrived in Wichita on July 24 to meet with counterparts and sign a Memorandum of Understanding (MOU) with a specific focus on economic and trade opportunities in aviation.

He Liang, director and researcher for the Shaanxi Aviation Economic and Technological Development Zone, said through a translator at the event that China "needs general aviation aircraft," but current policy in China has restricted the development of the aviation industry.

"We need to develop this industry, and [the US] has sophisticated expertise," He said in an interview with The Wichita Eagle. "With that, the infrastructure and the service industry will also be established, so it's a whole industry being developed." He also said the Chinese have seen the success of the general aviation industry in the US and hope to replicate it.

The aviation industry accounts for more than 50,000 jobs in the city of about 385,000, according to data from the Kansas Global Trade Services (KGTS), a Wichita-based non-government organization.

This Wichita-Xi'an partnership comes as officials in the world's second-largest economy are considering opening up the airspace.

"The increase in the number of airports and aircraft will require new infrastructure, aircraft engines and other equipment presents significant business opportunities for US exporters," the report said.

Karyn Page, president and CEO of KGTS, said the strategy for the city of Wichita is to "form relationships with several key aviation cities in China".

"Once we have the relationships with China set, we get better access and the doors open a little as the general aviation industry develops," Page told China Daily.

KGTS, founded in 1994, is a private organization that focuses on the promotion and support of international trade with the state of Kansas. 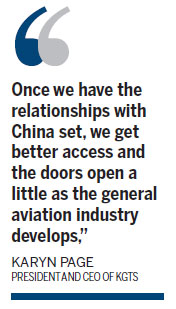 Considering Xi'an's interest in manufacturing commercial and general aviation aircraft, the announcement of the MOU is "kind of a logical partnership," Page said.

"The objective of the Global Air Capital Program is to promote the aviation industry in the Wichita region to the world and we're starting with China," she said. "But the important thing to remember is the program's objective is helping the aircraft industry."

In October 2012, Brewer, Wichita's mayor, led a 12-day trade trip to China where his group made note of a significant opportunity for Wichita's aviation industry.

"We started looking at what was going on in China two years ago and one of the things that we learned was they had huge future plans for aviation," he said. "So we've been encouraging individuals to come here, but what makes it even better is the fact that we have offices and partnerships in China."

"We continue to say we are one of the best kept secrets, and at the end of the day, anything that has to do with aviation can be found here in Wichita," Brewer said.

Kelsey Ryan, a reporter with The Wichita Eagle, in Wichita, Kansas, contributed to this report.