New products will counter impact of govt crackdown against corruption

Baijiu maker Wuliangye Yibin Co Ltd has teamed up with United States liquor giant Brown-Forman Corp to develop new products for emerging markets and counter sluggish baijiu sales business due to the ongoing crackdown on corruption and extravagance in China.

Brown-Forman, the Louisville-based wine and spirits producer that owns famous whiskey brand Jack Daniels, has already signed a cooperation agreement with Wuliangye in this regard, said sources. 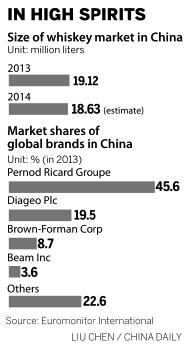 The US company was ranked third in China's whiskey market in 2013, behind France's Pernod Ricard Groupe and the United Kingdom-based Diageo Plc. Pernod Ricard had 45 percent of the market share in China, followed by Diageo with 19.5 percent and Brown-Forman at 8.7 percent, according to statistics provided by Euromonitor International.

But foreign spirits such as whiskeys have not done that badly during the same period as there are more opportunities for people to drink foreign spirits for their own leisure and entertainment such as socializing.

"The bar culture has played a big role in boosting demand in Chinese cities. It was not always like this before. So it makes sense that Brown-Forman has partnered with Wuliangye, a company that needs more diversification, and still has strong presence in distribution channels," said Roy.

Xiao Zhuqing, a liquor marketing specialist, said both companies are expected to develop emerging categories such as the cocktail brand Rio that targets young consumers.

"It is a growing trend that the age group of consumers using liquor products is becoming younger," said Xiao.

"Ready-to-drink cocktail has achieved quite positive reception among young consumer groups, inviting increasing attention from liquor producers to cash in the market."

Between 2009 and 2013, the cocktail market has maintained annual growth of 30 percent and is expected to reach 4 billion yuan ($647 million) this year, according to industry sources. The growth rate is much higher than liquor at 6 percent, beer at 9 percent and wine at 5 percent.

Youth in US, China building trust

Manager of Sydney Cafe dies as hero in hostage siege