Although the Chinese economy's pace of growth slowed in 2014, 15 Chinese companies had initial public offerings in the US last year. That may be a tough standard to uphold in 2015.

Nine of those chose the Nasdaq Stock Market - including e-commerce giant Alibaba Group Holding Ltd, which had a world record-breaking IPO in September - and six picked the New York Stock Exchange. That was seven more than had listed in the US in 2013.

Alibaba, which raised $21.1 billion in an IPO that broke the record set by Facebook in 2012, provided the bulk of the value.

China Daily interviewed financial industry professionals and professors about what makes listing in the US attractive to Chinese companies.

"One is, the United States' capital market is the deepest in the world," said David Ethridge, the head of global capital markets for the New York Stock Exchange. "We have well-developed companies, so there is a very substantial, active capital market.

"The Nasdaq and NYSE have unquestionably been the world's center for high-tech stocks and offer the deepest capacity for Chinese as well as other countries' technology companies," said Chen Zhiwu, a Yale University finance professor.

"There is the usually unnoticed value of marketing and free media promotion that comes with a successful listing in the US by a Chinese technology company," he said. "Typically, there is more media coverage of the company once listed in New York than in China domestically."

Andrew Karolyi, a professor of finance at Cornell University, said that listing shares in the US can expand a company's investor base and boost liquidity.

"Many companies, particularly companies that come from the countries traditionally associated with emerging markets, what they want to do often is to pursue opportunities that give their investors confidence in them, by listing their shares on a major stock exchange overseas where they have very rigorous monitoring of the company," he said. 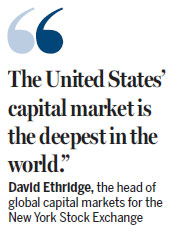 "We call it the bonding hypothesis," Karolyi said. "That is, the Chinese companies are coming to the US to "bond" themselves to the top regulatory and monitoring standard that is associated with being a public company in the US. It's different to what they experienced at home, and from that, investors get a big boost of confidence that they wouldn`t otherwise get."

Yan Hong, a finance professor at Shanghai's Jiaotong University, said listing in the US is easier than in China.

"Listing the shares in the Chinese A-share market is always more difficult than listing on Nasdaq and NYSE, Yan said. "For example, if you want to list your shares in China, you have to wait for a long time. Most of the technology companies, they don't have enough time. In addition, China has a more serious rule on accounting data like profits, which closes the door for most of the new technology companies," he said.

"Some companies were not able to accept the pressure of that scrutiny and became delisted and deregistered," Karolyi said. He named Sino Forest and Spectrum as two companies that could not withstand examination.

Shares of Weibo, Jumei, Xunlei Ltd, Ehi Car Services Ltd and Momo Inc are lower than their IPO prices. Jumei is trading at $14 after reaching $22 on its IPO.

"Probably Xunlei LTD and Weibo were among the most disappointing listings in 2014; both are still underwater relative to their IPO prices," Chen said. "For Xunlei, their failure may because of the change in customers. Xunlei's initial business was largely PC-based, but most users have gone mobile, so their business has been hurt to some extent, and they also have been facing copyright issues. For Weibo, I really think Weibo had waited too long and did its IPO just as it was becoming so clear that Weibo was going down."

Ethridge of the NYSE said that the exchange sees a wide mix of companies from China, but once they are listed, it's performance that matters.

"You got companies like Jumei, Cheetah Mobile, Alibaba and Ehi," Ethridge said. "You got very different business models; they set a milestone like listing on NYSE, but it will depend on each company, how they perform individually."

Alibaba, which owns Taobao.com and Tmall.com, is the major platform for brands and retailers in China. Taobao and Tmall account for about 80% of all Chinese e-commerce transactions.

Shares were bruised the last week in January when Alibaba was criticized in a report by China's State Administration for Industry and Commerce on Jan 28 that said the company is not doing enough to prevent fake goods from being sold on its Taobao website.

"But there is no question to me that they (Alibaba) have experienced, post-IPO, a valuation boost, not only at the time of the IPO," Karolyi said. "They got a valuation for their shares that they wouldn`t have gotten on Hong Kong. But even afterward, they have enjoyed a very positive boost. That's a very good company."

Chen was less enthusiastic: "I have some reservations about this case because the IPO was overhyped, which in the long run is not a good thing for investors or even for the company. Many academic finance studies show that overhyped IPOs often lead to long-term underperformance."

"I think the attention paid to Alibaba's IPO was reasonable considering the size of the offering, Alibaba's astounding financial performance, and the implications for global trade and e-commerce," he said.

"Alibaba is one of the most-discussed IPOs in years, and could become the biggest IPO of all time," said Nicholas Colas, Convergex Group chief market strategist. "Yet our survey reveals real questions that go beyond confidence in the company's fundamentals or the ability of the US market structure to handle an IPO of this size.

"Market participants clearly recognize Alibaba's potential, but are they fully comfortable with investing in a Chinese company?" he said.

Karolyi is optimistic: "We'll see another 20 to 30 Chinese companies will probably (list), not just technology, from any industry."

"Because both Alibaba and JD.com chose to list their shares in 2014, and most of the companies in China can't reach this height as they did in 2014, I don't think the number will grow on a large scale, since China is talking about canceling serious rules on accounting data (and if it does), the US market won't have such an attraction for Chinese companies like it did in 2014," Yan said.

Only a half-dozen Chinese Internet companies may have US IPOs in 2015. Some potential candidates are Dianping.com, a consumer review website, and Meituan.com, similar to coupon-oriented Groupon Inc.

"The US stock market will do reasonably well in 2015," Chen said. "Overall, the US economy is in great shape."

Wowo Ltd, a Beijing e-commerce firm, is set to become the first Chinese listing in the US in 2015.