At issue is adding Chinese currency to reserve basket

The International Monetary Fund is scheduled to formally meet later this year to review whether to include the Chinese currency in its Special Drawing Rights (SDR) basket.

The current SDR basket, which includes the US dollar, the British pound, the euro and the Japanese yen, is reviewed every five years.

Siddharth Tiwari, director of IMF's Strategy, Policy and Review Department, said on Tuesday that "we are also proposing extending the current SDR basket by nine months until Sept 30, 2016, to avoid changes in the basket at the end of the calendar year".

That can be costly for some SDR users to rebalance their portfolios, as markets and trading are typically thin at the beginning of the year. The current SDR basket expires at the end of 2015.

"An extension of nine months would also allow users to adjust to a potential changed basket composition should the executive board decide to include the RMB," he said.

But Tiwari indicated that the proposed extension, which will be decided by the 24-member executive board later this month, would not prejudge the timing of conclusion or outcome of the review.

In a report released on Tuesday, the IMF said that at the time of the last review in 2010, China met the gateway export criterion, meaning the use of renminbi, or yuan, in international trade, but the RMB was not included in the SDR basket because it was not judged to be freely usable, the second selection criterion for currencies.

The report said that across a range of indicators, the RMB is now exhibiting a significant degree of international use and trading.

The report points to several areas for further work that may help inform the board's final judgment. Those include additional work to close data gaps, refine the quantitative analysis for the freely usable assessment, and evaluate, in consultation with the membership and SDR users, whether the RMB would meet operational requirements, including as a result of continued liberalization measures that are being implemented by the authorities.

Tiwari said RMB is the only currency not currently in the SDR basket that meets the export criterion. Therefore, a key focus of the current review will be whether the RMB also meets the freely usable criterion.

Historically, decisions that have changed the valuation method have been made with a 70 percent majority.

The review is well underway, according to Tiwari. Further work still needs to be done in a number of areas to help inform the executive board's decision. Staff continues its technical work, including on addressing data gaps and operational issues while working closely with Chinese authorities and other members before the formal board meeting.

Eswar Prasad, a professor of trade policy at Cornell University and a senior fellow at the Brookings Institution, said that the IMF's review indicates that China has made significant progress on meeting the "freely usable" criterion for the RMB to be included in the SDR basket, but that more progress is needed.

"The decision about the RMB's inclusion in the basket hinges on reforms such as greater exchange-rate flexibility, more investor access to onshore foreign exchange and securities markets, and availability of a wider range of government debt securities," said Prasad, a former IMF China Division chief. 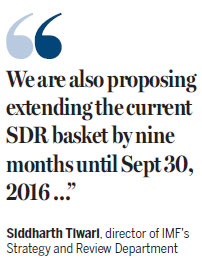 He said IMF staff also has signaled that the RMB's inclusion in the SDR basket will ultimately be a matter of judgment by the IMF executive board because the decision falls right at the margin.

"China clearly meets the 'export gateway' criterion, but the trajectory of China's financial development and RMB's international usage, while rising impressively, are not yet sufficient to meet the 'freely usable' criterion," Prasad told China Daily on Tuesday.

He said inclusion of the RMB in the SDR basket would give the currency the IMF's official imprimatur, facilitate its use as an international currency and enhance its acceptance as a reserve currency by foreign central banks.

"This could be more important for central banks than it is for market participants who may be less concerned about the IMF's official seal of approval," he said.

In a story published in the South China Morning Post in June, Li-Gang Liu, chief economist for Greater China, ANZ Bank in Hong Kong, and a non-resident visiting fellow at the Peterson Institute for International Economics, argued that the RMB has obtained the basic qualifications for inclusion in the SDR basket.

The RMB is now the second-largest global trade-financing currency, the fifth-largest global payment currency and the 10th-largest foreign exchange turnover currency, according to estimates by the Bank for International Settlements in 2013.