Xi calls for economic corridor with Russia and Mongolia

The top leaders of China, Russia and Mongolia launched a three-party summit on Thursday, during which President Xi Jinping proposed a three-way economic corridor featuring cross-border infrastructure and trade development.

They should also beef up interconnectivity by railway and road, facilitate customs clearance and study the construction of cross-border power grids, Xi said at the meeting on the sidelines of the Shanghai Cooperation Organization summit in Dushanbe, Tajikistan.

Mongolian President Tsakhiagiin Elbegdorj said the country hopes to boost infrastructure and cross-border transportation through strengthening cooperation with the other two.

Observers said the summit highlighted the countries' eagerness for close ties to fuel their economies and firm up their strength in the region.

They have seen challenges in economic growth and world affairs, which makes working together as neighbors the best choice, observers said.

Cooperation will mean more security along China's northern border and a broader market, which will be a key for China's Silk Road economic belt plan, said analysts.

"Ulan Bator is determined not to miss the chance for development as Beijing aims to boost neighborhood diplomacy and Moscow eyes boosting Russia's less-developed Far East region," said Chen Yurong, a senior researcher at the China Institute of International Studies. 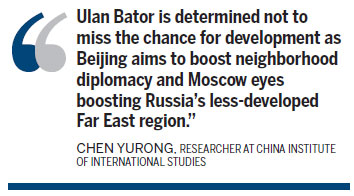 It will be difficult for Mongolia to revive its sluggish economy and improve its international status if it continues sticking to its third neighbor policy, said Chen.

The mineral-rich country is experiencing its weakest growth in four years. Foreign investment plummeted 70 percent in the first half, Bloomberg reported.

Kicking off the trilateral summit with China and Russia is a good start, said Gao.

The summit on Thursday followed visits to Mongolia by Xi in August and Putin in early September, and witnessed a number of agreements ranging from energy to infrastructure.

China is Mongolia's biggest economic partner, and they pledged to almost double their annual trade to $10 billion by 2020. Mongolia relies very much on Russia for its gasoline, diesel fuel and electricity.

Observers said closer coordination between the countries lets them play a bigger role in northeast Asia.

As part of its effort to seek a greater role in regional economic and security agenda, Mongolia became an observer state of the SCO in 2004, a bloc that includes China, Russia and Central Asian nations.

Ulan Bator has also applied for membership in the Asia-Pacific Economic Cooperation. 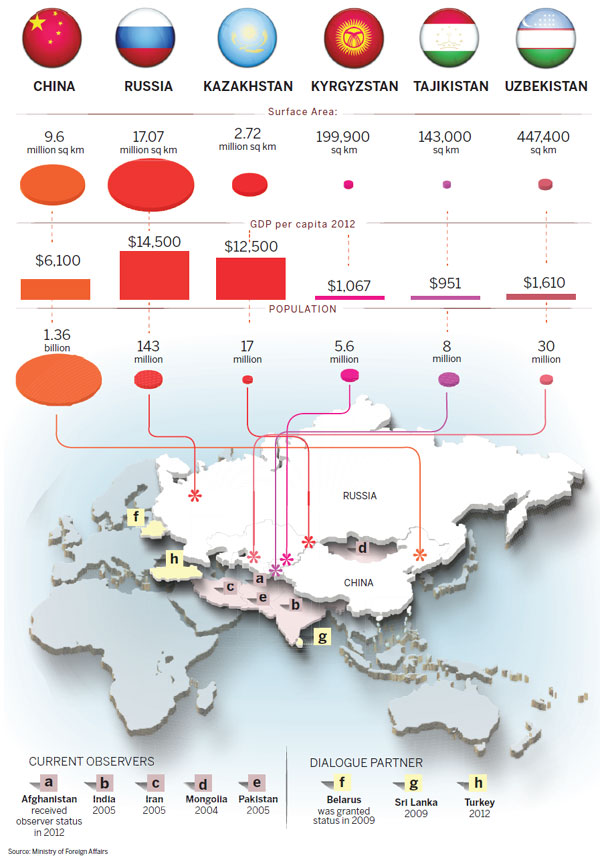 US teachers visit China on fellowship

US tourist in DPRK gets 6 years of hard labor