Tales abound about the pace of China's infrastructure development, but Broad Group, a privately-held maker of industrial climate-control systems, raised the bar with a 30-story structure built in 15 days.

Just as completion of the T30 hotel tower made headlines last year, the Changsha-based company announced a second ambitious plan: to build a 220-story skyscraper, set to become the world's tallest, within just seven months.

All this, according to Wang Shuguang, general manager of subsidiary Broad USA, is "just the beginning" of efforts to widen the company's core business beyond the manufacture of industrial heating, ventilation and air-conditioning systems.

"The idea is to set up franchises anywhere such as the United States, using the techniques of making sustainable prefabricated construction materials," Wang said from Broad USA's headquarters in Hackensack, New Jersey.

"Within 15 days, all construction was complete, including interior furnishings, heating-cooling and ventilation systems; everything was ready," he said proudly of T30, adding that the company's HVAC expertise helped cut construction time.

But speed isn't the whole story, Wang said. What Broad really wanted to showcase was its innovation in producing prefabricated building materials, which are assembled at the construction site.

Its sustainable-building techniques are attributed to Chairman Zhang Yue. The 52-year-old former artist founded Broad Group with about $3,000 in 1988, mainly to make air conditioners. 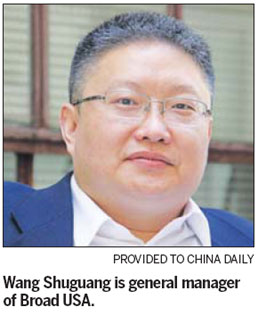 He turned his attention to construction of safer, less environmentally impactful buildings after the 2008 earthquake in Sichuan province that killed more than 87,000 people, including elementary-school students. Broad Sustainable Building, a unit for this business initiative, was set up the following year.

Using prefab components can slash the volume of construction materials used, are more energy-efficient than standard equivalents and can withstand an earthquake as strong as magnitude-9, Wang said. (The Sichuan quake was magnitude-7.9.)

"The recent Hurricane Sandy destroyed houses and buildings, and this is where our expertise to build sustainable and safer housing could be needed," he said, hinting that Broad intends to propose such projects in the US.

Wang wouldn't elaborate, but he said the company is eager to bring sustainable-construction projects to the US market soon.

Construction is expected to begin early this year of Broad's 220-story Sky City in Changsha, in Central China's Hunan province. Once completed, it will rise 10 meters higher - at 838 meters (2,749 feet) - than the Burj Khalifa in Dubai, currently the world's tallest building. Sky City's construction cost is estimated at $620 million; the Burj Khalifa, completed in 2010, took five years to build at a cost of $1.5 billion.

According to Zhang, sustainable construction will help address the challenges of China's rapid urbanization, including land shortages and traffic congestion. The materials and techniques used by Broad are "stable and as solid as a mountain" and will help "save the cities and save the Earth".

While there has been general concern expressed as to whether fast-paced construction may compromise safety, some industry experts have applauded Broad's initiative.

Antony Wood, executive director of the Council on Tall Buildings and Urban Habitat, which ranks the world's tallest structures, said his tour of the sleek T30 tower in Changsha reminded him of something from a James Bond movie. The seasoned, Chicago-based architect was wowed by Broad Group's well-managed job site and skilled work.

"To say I was impressed with the China Broad Group is something of an understatement," Wood wrote in an online post after his visit. He described the production lines that made the prefab materials as "real magic".

"The factories' assembly line showed the process to be remarkably simple in concept but, of course, highly complicated in delivery, since there can be virtually zero tolerance when bringing together major building elements on site," Wood noted.

Its sustainability philosophy has given Broad a high profile among international climate and environmental organizations.

The company is a member of the UK-based Climate Group, a nongovernmental organization that advocates action to address climate change, and of the United Nations Global Compact, a coalition of companies that emphasize social corporate responsibility.

Zhang received a Champions of the Earth award in 2011 from the UN Environment Programme.

"What we do has changed conventions in construction and even urban lifestyles. We aim to make everything environmentally sustainable."

Wang relocated from Broad's office in Henan province, central China, to lead the US operation less than two years ago.

Now 42, the CEO leads about 20 employees at the New Jersey headquarters and a representative office in Los Angeles.

Broad USA was incorporated in New York in the 1990s and moved to New Jersey after its office in the World Trade Center was destroyed in the Sept 11, 2001, attacks.

The subsidiary is mainly a sales provider for Broad Group in the US, serving about 200 business customers that have bought its gas- or waste fuel-powered AC systems, contributing to $15 million in annual sales.

These clients, including Columbia and Princeton universities, appreciate the company's ideas in energy-saving and green development, Wang said.

"We are making changes and creating history in our innovation, and one day we want to be a good example and be remembered like inventors such as James Watt and the Wright brothers," he said.