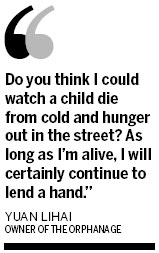 Woman has heart attack after police questioning on fire

The owner of an illegal orphanage in Central China was sent to hospital over the weekend suffering a heart attack after she was questioned by police about a fire that killed six children and a young adult.

Yuan Lihai, the operator of the orphanage in Lankao county, Henan province, had been living with 18 adopted children, the local government said.

When the blaze broke out on Friday, only eight of the children were in the house. Yuan had taken the older ones to school or left them in the care of other people, Wu Changsheng, deputy chief of the county, said at a news conference on Saturday. The unhurt children have been sent to a welfare home in Kaifeng, which administers Lankao.

The fire swept through the home, killing four children at the scene. The other three victims lost their lives on the way to hospital.

Two days after the fire, Yuan, 48, was lying in bed in a hospital in Lankao, her eyes shut.

"I received a phone call from publicity officials around 10 pm on Saturday and was told that my mom was sick," said Du Ming, Yuan's younger son. "So my elder brother and I rushed to the hotel where my mom was staying and took her to the hospital.

"My mom hasn't eaten a meal since this happened. Her heart attack was the result of anxiety."

Before Yuan had the attack, local authorities had been holding her in a hotel room for questioning, her wheareabouts unknown to her family, according to Xinhua News Agency.

The cause of the fire is still under investigation.

Yuan has been taking care of orphans and abandoned children since 1986, raising money by selling snacks and helping local dealers sell building materials.

"I hired a nurse to help me look after the kids, but she had a second job at the county hospital," Yuan told Xinhua. "She left every morning after preparing the children's breakfast."

Yuan's adoption of abandoned children has been a subject of controversy in the media and among residents. Her orphanage is unlicensed and some people have accused her of using the children to illegally obtain subsidies from the government.

A local social organization reported in 2010 that Yuan had made money through adoptions.

In response to such accusations, Yuan told Xinhua on Friday: "Shoot me if you have evidence that I sold any children."

Wu, the deputy county head of Lankao, said on Saturday that the government had tolerated Yuan's orphanage.

"She has no qualifications to be adopting, but we decided to let her do it after taking her kindhearted acts into consideration," he said.

Wu said the local government has provided Yuan assistance, including basic living allowances for the children.

Civil affairs officials have visited the orphanage from time to time, bringing cash and food to the children, Yuan told Xinhua.

She applied on the children's behalf for the government subsidies, which amounted to about 5,000 yuan ($800) every three months.

In 2011, media reports emerged about the "foster home". Officials from the civil affairs authority persuaded Yuan to send the children to public orphanages.

She put five children in a welfare home in Kaifeng, but kept the rest. "I couldn't bear to see them go," she told Xinhua. "They are all like my own children. Many of them never knew they were abandoned and saw me as their biological mother."

Wu said: "The current situation is directly related to some government departments' failure to supervise and their loose management.

"Those were our faults."

China plans to carry out a monthlong inspection of orphanages run by individuals and private operators, the Ministry of Civil Affairs said on Sunday.

Lankao county's first social welfare center for children is expected to be built in 2013, according to local officials.

Yuan, asked by a Xinhua reporter whether she would continue her charity work, replied: "Do you think I could watch a child die from cold and hunger out in the street? As long as I'm alive, I will certainly continue to lend a hand."