Add feng shui to the mix of home-buying factors

It then hired Clodagh, an internationally acclaimed interior designer who goes by one name, to incorporate feng shui elements into the building's design.

"Wherever you go, wherever you look, it should be beautiful," said Clodagh, an Irish designer who has lived in New York for 25 years and boasts an award-winning portfolio of work in two dozen countries.

Feng shui is an ancient and complex body of knowledge developed 3,000 years ago in China. Feng means wind and shui means water. The combination of good feng and shui usually means, in Chinese culture, good health and fortune, and vice versa.

"The five essential elements of feng shui must be represented in the design of 225 Rector Place - metal, wood, water, fire and earth," said Clodagh, who became interested in feng shui in 1985.

"Also, the colors must be right for the location, so I included red for fire energy and black for water. And I use 'up' light as well as 'down' light to lift energy, rather than compress it."

Clodagh, whose projects include million-square-foot hotels, residential buildings and spas, also said she rids kitchens of stale, unused items "so that stagnation is abolished and energy flows smoothly".

From 225 Rector Place, which faces the Hudson River, residents can see the Statue of Liberty. Units range from studios to three-bedroom apartments, at prices of about $500,000 to more than $2 million. The building contains some 300 units, 72 of which were sold by the original developer. After Related came in, 181 units were available to sell.

And results exceeded the developer's expectations. 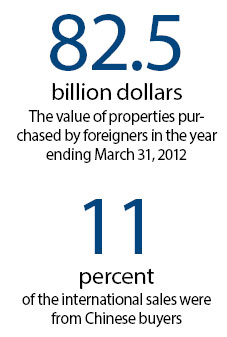 "We sold about 120 of the 180, and almost half of the buyers were from China," said Sherry Tobak, senior vice-president of sales at Related and sales director at 225 Rector Place. She said the firm hoped to bring greenery and water elements into the design in response to Chinese customers' love of water, which traditionally represents wealth.

"The hallway carpeting is an example. It was inspired by images of flowing water over stones.

The building is close to the site of the World Trade Center and Manhattan's Chinatown, and faces the Hudson River.

Chinese buyers typically look for homes as an investment or to use as a residence for children who might someday study in the US.

"My experience is, when you sell to one Chinese buyer, he works in a tight community, and the buyer will tell people around him," Tobak said.

One deal can yield as many as 10 references from a satisfied Chinese client, she said.

To better understand wealthy Chinese clients and their culture, Related built relationships with several Chinese-speaking buyers as well as lawyers and mortgage brokers, who can help in an international purchase.

Brokers are optimistic about Manhattan's real estate market in 2013, due to an inflow of investors from abroad, with Chinese a powerful segment, said Nikki Field, vice-president of Sotheby's Realty.

According to the National Association of Realtors, a leading US industry group, low prices and the relatively weak dollar are major reasons for increased US purchases by foreigners.

International sales totaled $82.5 billion for the 12 months ending in March 2012. China-based clients accounted for 11 percent of the total, up from 9 percent in the same period a year earlier, making them second only to Canadians as leading buyers of US residential property.

Consideration of feng shui factors into nearly every purchase decision by Chinese clients, according to Gary Kiyan, director of sales and brokerage services at New York's Anchor Associates. He has dealt with Chinese real estate investors in Manhattan.

"Chinese buyers - and renters - are interested in location and price primarily," Kiyan said.

"After the area and price are established, they will express interest in the feng shui aspects of the apartment."

"Many Chinese clients have also expressed interest in the number 8, which in Chinese sounds like 'fortune', so apartments on the 8th or 16th floor seem to hold interest for some Chinese buyers," he said.

"We have seen an increase in Chinese buyers and renters and expect more in the future," Kiyan said.

"I definitely believe that the feng shui aspects matter in deals," she said.

"That's a typical question I ask my clients, and 8 out of 10 Chinese or Asian-Americans care," Wu added. "Even if some of them don't, their parents who help with the purchase will, which ultimately affects the purchasing process."