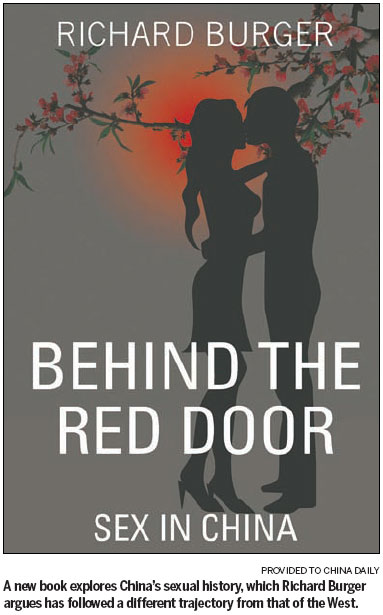 In Behind the Red Door, the journalist Richard Burger suggests that while it is tempting to view China's growing openness toward sex to be in delayed parallel to the West, the country's sexual history has traveled a separate course.

"No other culture has experienced such dramatic swings in attitudes toward sex," Burger said. "China and the West have followed radically different trajectories."

Western readers might be surprised to learn that ancient China rivaled Greece for pushing the boundaries of openness toward human sexuality. As far back as the Warring States period (841 -221 BC), ruling lords and emperors were widely documented to have openly taken young male lovers. Taoist practitioners also advocated sex with multiple women for longevity.

While the oft-repeated categorization of China as a "land of contradictions" is at this point a worn cliché, Burger notes that the cliché only exists because of how accurate the label has proved to be. The contradictions that have long complicated generalizations about Chinese culture and history are just as dramatic in surveying the country's relationship with sex, he said.

"Looking at a Chinese newspaper one day you might get the impression China is as sexually liberated as Sweden, and the next you might think China is actively engaged in sexual repression," he writes. "Are the Chinese hyper-shy about sex or surprisingly liberal? As the expression goes:

It's complicated. The story of sex in China, from thousands of years ago to today, is an astonishing one Contradictions have been there throughout China's sexual history, and they are alive and well today."

Under the Tang Dynasty (AD 618-907), China experienced "unprecedented sexual liberalism," only to swing toward "repressive orthodoxy" under the Qing rulers (1644-1911). Shifts in sexual attitudes occurred even within dynastic periods, and as Burger notes, some of China's most graphically sexual art was produced during so-called repressive eras.

Western influences have played an undeniable role in shifting Chinese attitudes toward sex, dating back to the country's defeat during the second Opium War (1856-1860), Burger argues. Flabbergasted at the seeming ease with which the British had won, Qing emperors began studying Western philosophies and religions, leading to a pointed shift toward sexual restrictiveness. Puritanical attitudes reached an apex during the "Cultural Revolution" (1966-76), only easing after the opening up of the 1980s, as Western businessmen arrived with expectations of a ready sex trade.

Among the variety of subjects tackled in Behind the Red Door are the continued ban against pornography; the vast differences in sexual attitudes that exist between youth in urban areas and their rural counterparts; hymen restoration surgery; and increasing rates of infidelity among a growing population of migrant workers separated from their families.

For China's gay population, progress seems muddled: large numbers of homosexuals continue to enter into sham marriages with opposite-sex partners to avoid the shame of coming out, even as national media seem to celebrate symbolic gay marriage ceremonies.

Previous attempts to explore the subject have mainly taken an academic approach; "Behind the Red Door" is written for mainstream audiences, Burger said.

"Most books on China seem to focus on the economy and the politics, but an understanding of the more human side of things also helps to bridge that gap between the two worlds," said Earnshaw Books CEO Graham Earnshaw, who commissioned the book.

"As China charges towards the future, sexual behavior and attitudes towards sex are both changing fast, and we commissioned this book from Richard in order to document and explain the fascinating issues that result. Chinese people handle such issues as prostitution, homosexuality and infidelity in some ways parallel to that of other cultures, for sure, but they also diverge dramatically in others. It is an area well worth exploring."

Burger, who runs the popular Peking Duck blog, lived in China for eight years and handled public relations for the Beijing Olympics in 2008.

Various factors should be considered in comparing Eastern and Western sexual attitudes, he said. While Western religions have often framed sex (and particularly homosexuality) as a shameful behavior, China's primary philosophies, Confucianism and Taoism, have long advocated sex for general health.

Earnshaw noted further cultural differences: "One underlying factor is 'guilt versus shame,'" he said. "China is a shame culture. Whatever you do, you only have to feel bad about it if you are found out. That is a rough generalization, of course, but there is much truth to it, and it is an approach that impacts on Chinese sexual conduct in many ways."

Burger was surprised by the role the Chinese government has played in guiding the relaxing of restrictions against sex, he said. He noted the 1990s development of call-in radio programs, during which people could talk to government-appointed sex experts.

"That was when Chinese people really began realizing they weren't alone with their yearnings and frustrations," he said. "But the real reason for these shows was because the Chinese government understands that a sexually satisfied society is a more stable one. When people are content, they're more likely to be part of a harmonious society."

Despite evidence of major changes over the last decades, cultural attitudes are extremely difficult to re-program, Burger said. But as Chinese youth are further exposed to the West, they will only expect more sexual freedom and choice.

"Once you start this process, it's almost impossible to turn the clock back and take these things away," he said. "Chinese people are less ashamed today. It's clear that China is on a slow but steady path toward more and more sexual openness."