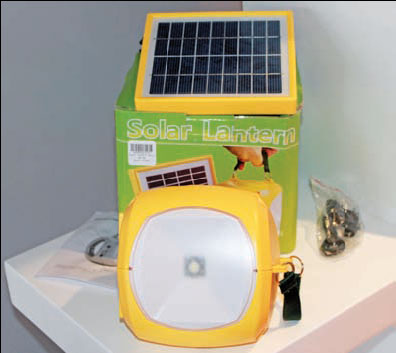 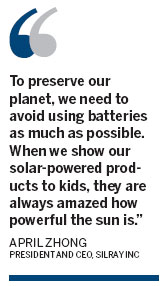 The opening of her first store, April Zhong hopes, is just the first step toward a goal of owning a retail chain devoted to solar-powered gear for consumers.

Zhong's latest venture, Solar Planet, is the first of its kind in Palo Alto, California, but the 46-year-old businesswoman has bigger dreams - a nationwide network of solar-power emporiums that would be franchised.

"I believe we should engage in retailing solar products because they can reach consumers directly, especially children," Zhong said. "They need to learn that a green planet is important to our future, and solar toys walk right into their life to serve that purpose."

Some of Solar Planet's products, she said, are designed to get kids to enjoy playing with battery-free toys: "To preserve our planet, we need to avoid using batteries as much as possible. When we show our solar-powered products to kids, they are always amazed how powerful the sun is."

The store, which is open for business and will have a ceremonial grand opening on Feb 9, sells novelty items include solar-panel-equipped backpacks for hiking and cycling, solar-powered smartphone chargers, solar fans, solar energizers (portable energy sources), and gadgets made of LED bulbs that can cut electricity usage by 80 percent and last up to 8 years.

"I believe the solar retail market is far from developed in this country; you hardly see any franchised solar retail stores in the US. That's why I want to take the initiative at this moment," Zhong said. "The market will be very different in the next decade. Hopefully, we will see more and more of these types of products accessible to most of the population in the future."

"The concept of selling green energy is something we should always make an effort to do," he said.

According to Scharff, the city has launched many small and large green-energy projects in recent years,and he is glad to see a private-sector link to consumers through Solar Planet.

Zhong is well-known in her community as president and CEO of SilRay Inc, which helps residential and business customers plan, finance, build and maintain solar-powered electricity systems. From no revenue in 2007 she turned her company into a $38 million-a-year business by 2010. In 2011, SilRay was honored as Minority Retail Energy Firm of the Year by the US Commerce Department, making Zhong the youngest Chinese-American entrepreneur to win the award. She was also the first minority businesswoman to win a solar power plant construction contract from the US Coast Guard, beating out 150 bidders.

In six years, SilRay has developed more than 20 megawatts of solar power plants in the US. Direct construction impact (including labor, capital, land and contingencies) was $92 million, and each year 164 jobs are directly associated with building each plant.

Zhong, who immigrated to the US in 1987, received her master of business administration degree and a master of science degree in biotechnology from Northwestern University. She had graduated from Beijing Agricultural University.

Her biggest challenge as a minority entrepreneur, she said, has been the industry's dominance by white men.

"The solar industry is known for being a club for 'white boys'," Zhong said. "When you are bidding for government projects, you will not win if you don't have superb products, extremely competitive price, layers of resources of contractors, installers and reliable laborers."

Her company is currently developing 12 solar power plants in five counties in California. She intends to have SilRay install 100 megawatts of solar-power capacity in plants throughout the US. Her ambitions also include becoming the country's top 10 utility-scale solar-power producer and the No 1 minority-owned solar-energy provider by 2016.