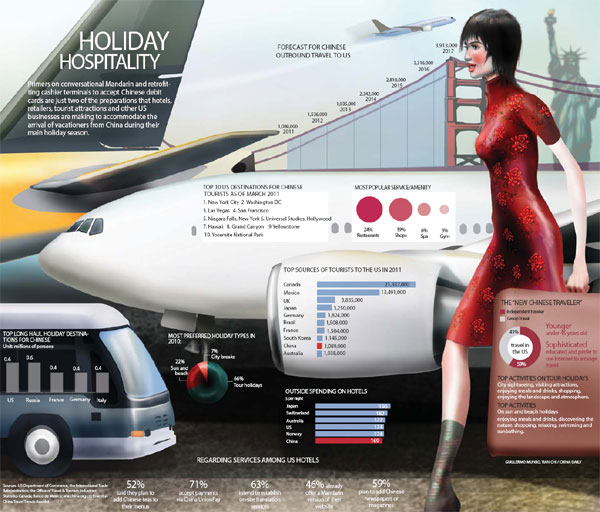 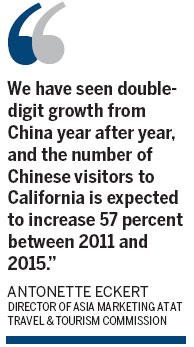 US merchants are ready with special products, snake-themed displays and Mandarin-speaking staff to greet the shopping sprees of Chinese travelers celebrating the Chinese New Year during an otherwise slow winter for US tourism.

The Chinese Lunar New Year, or Spring Festival, begins on Feb 10 and can stretch into two weeks when combined with the Lantern Festival, which begins Feb 24.

On Fifth Avenue in New York, the No 1 US destination city for Chinese tourists according to latest data, decorations at luxury emporium Bulgari include a giant illuminated snake on the store's exterior in celebration of this year's Chinese Zodiac animal.

Across the street from Bulgari, the upscale Bergdorf Goodman women's department store has added Mandarin-speaking staff and a Lunar New Year-themed window display.

Since its inception in 2002, China UnionPay has grown and is now accepted in 135 countries. US retailers began accepting China UnionPay credit cards in December 2005, but have been slow to accept the debit cards.

"Some merchants in the US think PIN pads for China UnionPay debit cards make their store less decent," Hou said. "But it's quite different for Chinese, and PIN pads mean security for Chinese travelers."

From Feb 1 through Feb 28, a China UnionPay cardholder who spends at least $250 in one day at San Francisco Saks stores will get to select a mystery red envelope (red is considered a lucky color in China) that contains a Saks gift card valued at $20 to$250.

"Our stores are well-stocked and we know that Disney logo merchandise is popular among our visiting Chinese tourists, so we look forward to them enjoying the many shops inside our theme parks and in our Downtown Disney shopping zone," Garcia said. "The Disneyland Resort has benefitted from becoming more accessible to Chinese travelers, thanks to China's Authorized Destinations Status of the US, and the increased speed of granting US tourist visas."

"I never schedule my holidays during February, because my commission usually doubles in this month due to generous travelers from the Chinese mainland," said a saleswoman at Macy's in San Francisco, who declined to provide her name. She has worked at Macy's for six years and speaks basic Mandarin.

"Our travel agency has designed tour schedules due to the special requests of some Chinese parents, who want their children to visit Stanford or Berkley on the trip," Jenny Guo, the office manager of Dollar Travel & Charter Inc in Burlingame, California, told China Daily.

The California Travel and Tourism Commission, the state's official travel promoter, and four Chinese tourism companies, have started a project aimed at making the Golden State the top destination for Chinese travelers during Spring Festival.

"We have seen double-digit growth from China year after year, and the number of Chinese visitors to California is expected to increase 57 percent between 2011 and 2015," Antonette Eckert, director of Asia marketing at CA Travel & Tourism Commission, told China Daily.

"China specifically presents tremendous opportunity for California. Given the spending of 65 visitors supports one tourism-related job, the impact of such significant growth from China would create more jobs for Californians."

In 2011, China was California's fourth-largest overseas market, with only the United Kingdom, Australia and Japan having higher numbers.

China is California's fastest-growing inbound market, and California is the No 1 US destination for visitors from China. They spent a record $1.5 billion in the state in 2011, the equivalent of $274 per day during the average 10.6-night stay, or approximately $2,900 per visitor. Chinese visitors stay longer and spend more than the average overseas visitor to the state.

As of October 2012, there were 469 non-stop flights per month from China to California, accounting for 152,169 available seats per month. More flights that are expected to be announced this year will increase the capacity.

"We recently led a sales mission to China surrounding China International Travel Mart in November, and brought 18 California delegates with us to meet with travel trade in Beijing and Shanghai," Eckert said.